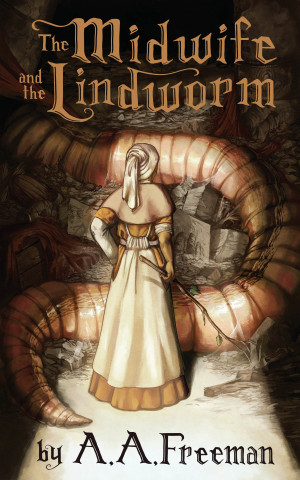 The Midwife and the Lindworm

Now, almost twenty years later, the queen has called upon The Midwife again—this time, to rid the castle of The Lindworm once and for all. Devouring maidens from across the land, it seems the monster’s thirst for blood cannot be slaked. But the sensible Midwife has no patience for histrionic queens or fae monsters. She intends to settle this. All of it.
Download: epub mobi (Kindle) pdf more Online Reader
lrf pdb txt
Price: Free! USD
Add to Library
Create Widget
Tags: comedy humor fantasy midwife worm dragon retelling lbgt fantasy
About A. A. Freeman

A. A. Freeman is an author, crafter, and all-around geek that lives in the foothills of North Carolina and spends her days writing fantasy and science fiction with a hint of romance. When not writing she knits, cross stitches, plays video games and works on perfecting her dried rose petal shortbread cookie recipe. She's probably not a robot. Beep boop.

Learn more about A. A. Freeman

Reviews of The Midwife and the Lindworm by A. A. Freeman

"No defenestration during that birth at all."

Amusing short fantasy story. The Midwife was not bothered by the Queen's request to defeat the Lindworm and devised a clever way to achieve this.

After knowing this story is a norwegian fairy tale I was really curious about it. Although it's a good story, with some weird characters and creepy descriptions, I was hopping for a different Lindworm and a "darker ending".

You have subscribed to alerts for A. A. Freeman.

You have been added to A. A. Freeman's favorite list.

You can also sign-up to receive email notifications whenever A. A. Freeman releases a new book.