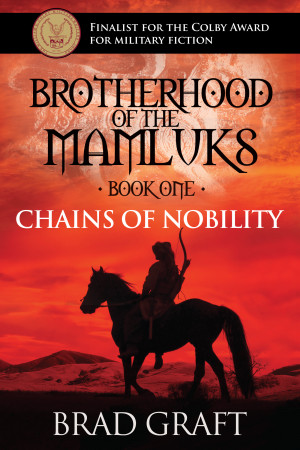 Chains of Nobility: Brotherhood of the Mamluks (Book 1)

By Brad Graft
Chains of Nobility is the first book in the Brotherhood of the Mamluks trilogy. Set during the 13th century, the book is an immersive dive into the world of military slavery—a little-known Muslim force whose ranks ousted the Crusaders and Mongols from the Levant, preserving Islam. Graft, a former U.S. Marine officer, conveys to his characters an authentic understanding of combat. More
Duyal, a teenage nomad living on the vast Russian steppe, is captured during a Mongol invasion and forced on a long, deadly journey into the war-torn Middle East. Purchased by a Kurdish prince in eastern Turkey, his destination is an Islamic citadel, filled with similarly enslaved strangers and one merciless instructor—a man determined to purge the weaklings from his ranks and forge the survivors into Mamluks, Islamic Knights unmatched in wielding sword, arrows, and lance from atop Arabian steeds.

When Duyal becomes entangled in his instructor’s schemes and his mates witness another comrade’s unjust execution, the recruits can take it no longer. Their wrath is unleashed.

Chains of Nobility is the first book in the Brotherhood of the Mamluks trilogy. Set during the 13th century, the book is an immersive dive into the world of military slavery—a Muslim institution largely unheard of in the West, whose ranks ousted the Crusaders and Mongols from the Levant, preserving Islam.

Graft, a former U.S. Marine officer who served in Somalia, conveys to his characters an authentic understanding of combat and the hearts of fighting men. He brings to life the intriguing story behind the Mamluk Sword, the saber worn traditionally by Marines as part of the dress uniform. Based on exhaustive research that took the author to Mongolia and the Middle East, the book is filled with vivid cultural details, battle accounts, and realistic characters. In all, the Brotherhood of the Mamluks trilogy reveals the fascinating and little-known story of the Mamluks.

*One hundred percent of the author’s income from the sales of this book will be donated to screened charities that support wounded veterans and families of the fallen.

“Graft nimbly inserts the reader into the world and mindset of the medieval jihadi. From the Russian steppe to inside the citadel walls, he takes us where Mamluks are made and loyalty between comrades is sealed.
— Steven Pressfield. bestselling author of The Legend of Bagger Vance, The Warrior Ethos and Gates of Fire

“Chains of Nobility is a harrowing tale of comradeship and combat, providing an in-the-saddle look at the process of creating Mamluks—early Islam's military elite. A great piece of work."
— Nathaniel Fick, former Marine officer and New York Times bestselling author of One Bullet Away: The Making of a Marine Officer

“A gripping saga of brotherhood and devotion, Chains of Nobility is a must-read for military history buffs. Author Brad Graft enlightens us on the little-known reason behind Medieval Islam’s triumphs during the Middle Ages: nomadic youth enslaved by the descendants of Saladin and sharpened into the spear tip of Muslim armies.”
— Michael Franzak, former Marine pilot and author of A Nightmare’s Prayer, winner of the 2012 Colby Award.

About the Series: Brotherhood of the Mamluks

Duyal, a teenage nomad living on the Russian steppe during the Middle Ages, is captured by Mongol invaders and forced on a deadly journey into Eastern Turkey. Sold to a Kurdish prince, Duyal and his fellow Kipchak tribesmen are slated to become military slaves. Yet before being granted the desired title, “Mamluk,” the recruits must endure a right of passage: brutal training at an Islamic citadel.

In Book One, <i>Chains of Nobility</i>, Duyal and his fellows are made to suffer the painful transition from hearty pagan nomads to elite Islamic knights. In Book Two, Duyal and his fellow comrades are grown men—Royal Mamluks, freed and promoted—serving the Sultan of Egypt in vicious opposition to King Louis’ Seventh Crusade. In Book Three, the Mamluks face this enemy of their youth—Mongols, who sacked their Kipchak tribes, slew their kin, and stole their native lands more than twenty years prior.

You have subscribed to alerts for Brad Graft.

You have been added to Brad Graft's favorite list.

You can also sign-up to receive email notifications whenever Brad Graft releases a new book.