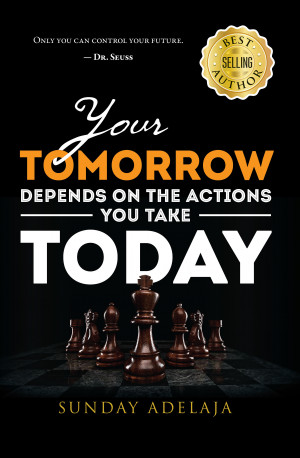 Your Tomorrow Depends on the Actions You Take Today

Sunday Adelaja is the founder and senior pastor of the Embassy of God in Kiev Ukraine and the author of more than 300 books which are translated in several languages including Chinese, German, French, Arabic, etc.
A fatherless child from a 40 hut village in Nigeria, Sunday was recruited by communist Russia to ignite a revolution, instead he was saved just before leaving for the USSR where he secretly trained himself in the Bible while earning a Master’s degree in journalism. By age thirty-three he had built the largest church in Europe.
Today, his church in Kiev has planted over a thousand daughter churches in over fifty countries of the world. Right now they plant four new churches every week. He is known to be the only person in the world pastoring a cross cultural church where 99% of his twenty five thousand members are white Caucasians.
His work has been widely reported by world media outlets like Washington Post, The wall street Journal, Forbes, New York times, Associated Press, Reuters, CNN, BBC, German, Dutch, French National television, etc.
Pastor Sunday had the opportunity to speak on a number of occasions in the United Nations. In 2007 he had the rare privilege of opening the United States Senate with prayers. He has spoken in the Israeli Knesset and the Japanese parliament along with several other countries. Pastor Sunday is known as an expert in national transformation through biblical principles and values.
Pastor Sunday is happily married to his “princess’ Pastor Bose Adelaja. They are blessed with three children, Perez, Zoe and Pearl.

About the Series: Personal growth

How to live an effective life? How to discover your calling? How to achieve your life goals? All these and many more questions will be answered in books of this series.

You have subscribed to alerts for Sunday Adelaja.

You have been added to Sunday Adelaja's favorite list.

You can also sign-up to receive email notifications whenever Sunday Adelaja releases a new book.