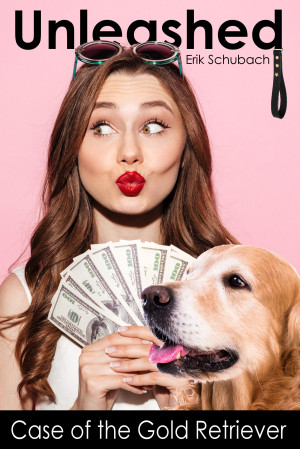 Unleashed: Case of the Gold Retriever

By Erik Schubach
Like a magnet for trouble, Finnegan finds herself embroiled in a string of robberies that has spanned decades, while she tries to rescue a stray golden retriever who dropped a bag of money at her feet.

It is up to Detective Jane McLeary to solve the famous Broadway Cat thefts before Finnegan finds herself knee deep in things yet again. More
Finnegan May has had an eventful time in Manhattan since she first moved to New York City. Her unique profession and quirky, bubbly personality endear her to everyone who meets her.

Like a magnet for trouble, Finnegan finds herself embroiled in a string of robberies that has spanned decades, while she tries to rescue a stray golden retriever who dropped a bag of money at her feet.

I got my start writing romance novels by accident. I have always been drawn to strong female characters in books, like Honor Harrington. And I also believe that there is a lack of LGBT characters in media. So one day I came up with a story idea that combines the two... two days later I completed the manuscript for Music of the Soul.

My writing style may not be the most professional nor grammatically correct, but I never profess to be an English major, just a person that wants to share a story. I maintain that my primary language is sarcasm.

Each of my books features strong likeable female characters that are flawed. I think that flaws and emotional or physical scars make us human and give us more character than simply conforming to some "social norm".

I have also started a SciFi series, The Valkyrie Chronicles which features a Valkyrie, Kara, who was left behind on Earth five thousand years ago to help the Asgard race escape the onslaught of the Ragnarok horde. With the aid of a human, Kate, she holds the line in battle to herald the return of the Asgard!

If you like magic, paranormal romance and witches, then my new series Fracture might tickle your fancy. In the first book Fracture: Divergence, Alex King must stop magic from destroying reality. The problem is that Alex must solve the case in parallel universes where in one Alex is male and female in the other.

There is even a modern shapeshifter paranormal series, Drakon. Featuring a fiery Irish woman with a sharp wit and sharper temper who finds out she is a dragon of legend.

About the Series: Unleashed

This cozy mystery lesbian romantic comedy series follows Finnegan May as she navigates the dog walking industry in New York City. Her roommate and love interest, Detective Jane McLeary, has her hands full keeping Fin out of the trouble that just seems to gravitate to her.

You have subscribed to alerts for Erik Schubach.

You have been added to Erik Schubach's favorite list.

You can also sign-up to receive email notifications whenever Erik Schubach releases a new book.