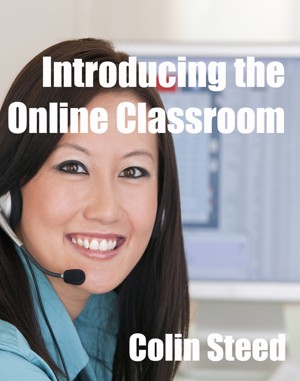 By Colin Steed
A basic guide to the benefits, challenges, opportunities and faciities provided by the Live Online Classroom. For business managers, learning and development managers, and everyone who needs to gain an insight to providing learning online. More
Live instructor-led online learning—sometimes called synchronous or virtual classroom learning—has ushered in a new age in distance learning.

The attraction for organisations to be able to offer more training for less—through travel and accommodation cost savings, combined with the rapid deployment of training to large numbers of learners—has led to a sharp increase in the use of live online learning in recent years, both in the US and Europe.

For business managers, learning and development managers, and everyone who needs to gain an insight to providing learning online.

Colin Steed has over 35 years experience in the IT training industry. Having spent ten years in the British Airways’ IT department, where he was responsible for training computer operations staff, he joined the major IT conference organisers and publishers Infotech in 1978.

He founded Training Information Network and launched the first magazine in the IT training field— IT Training—where he edited the publication until it was sold in 1998.

Additionally, he launched Management Skills & Development magazine and later in 1995, he was instrumental in founding and setting up the Institute of IT Training, the world’s first professional body for IT training professionals.

In 1998, whilst at the Hemmings Group, he co-founded and edited a newly-launched magazine, IT Skills and founded the IT Skills Research Programme—providing IT skills and development intelligence for training providers.

His first book was published by Gower Publishing in 1999, Web-Based Training, which was the first book to be published on the subject (the forerunner of live online learning) in Europe.
In February 2000, he was presented with the Institute of IT Training’s Colin Corder Award for his achievements and services to the IT training industry.

He was appointed as Chief Executive of the Institute of IT Training in October 2000. In 2002 he was published as one of ten people in IT Training magazine's IT Training Hall of Fame.
Following his charity work for the children’s charity NSPCC ChildLine, in 2011 he was awarded Patron status of NSPCC ChildLine to recognise his achievement of raising over £200,000 for the charity since he launched the IITT Charity Auction in 2001.

Colin is a prolific writer and publisher and has had numerous articles and white papers published. He is currently expanding his portfolio of books, white papers, videos and webinars on live online learning.

You have subscribed to alerts for Colin Steed.

You have been added to Colin Steed's favorite list.

You can also sign-up to receive email notifications whenever Colin Steed releases a new book.