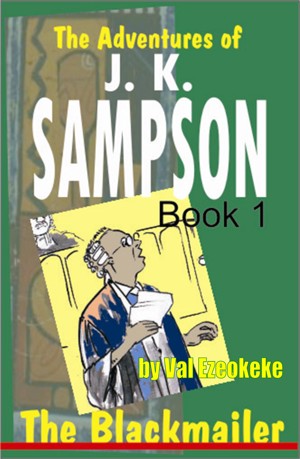 The Adventures of J.K Sampson - The Blackmailer

By Val Ezeokeke
The book features the exciting cases of J.K.Sampson – a fictional trial lawyer who specializes in murder cases. Working out of Lagos Nigeria, Sampson uses remarkable investigative skills and mastery of courtroom advocacy to solve murder mysteries.

Val Ezeokeke lives in Lagos, Nigeria in a “warm little house” which he sometimes calls “The Silver Cottage” – the title of one of his numerous short stories. He was born on February 14 1965, in Afikpo in the south east of the country – the second of seven children in a family where both parents were teachers and where tertiary education was compulsory.
He attended the University of Lagos, where he earned an honours degree in law in 1986. He was admitted to the Nigerian Bar the following year after completing the approved course of study at the Nigerian Law School.
After his one year compulsory national service at the Federal Housing Authority in Lagos, Val went into full blown private practice, first as an Associate in a south east Law firm, and years later as a partner in a Lagos firm which he co-founded in 1992.
Early in life, Val made up his mind that he would one day write a book, no matter the profession he eventually ended up in. He started writing short stories for the radio way back in the early eighties while still in the high school.
Although Val rarely handles murder trials, he created J.K.Sampson – a murder expert – purely out of a desire to share the thrills of court room drama. He intends to continue to write the Sampson series for as long as the demands of his busy practice would permit.
Val is married to Ezenwanyi – an English language teacher and they have one daughter, Chinwendu.

You have subscribed to alerts for Val Ezeokeke.

You have been added to Val Ezeokeke's favorite list.

You can also sign-up to receive email notifications whenever Val Ezeokeke releases a new book.