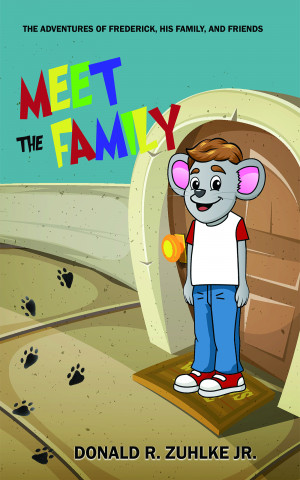 By Donald R. Zuhlke, Jr
Join Frederick, His Family, and Friends as you Meet the Family in this wonderful tale of friendship.

Donald Robert Zuhlke Jr. (Born May 11, 1967) is an American author of children’s books. Donald is also a satirist, amateur historian and an evangelical Christian.
Donald was adopted by Donald Sr. and Betsy Zuhlke in late 1967.
He considers Janesville, Wisconsin as his hometown but has a soft spot for Sparta, Wisconsin.
Donald married Ellen Phifer in 1992. They have now been married for over 25 years and have two children (Elizabeth, 1993 and William J.C. Zuhlke, 1996).
Donald’s first work is “Meet the Family – The Adventures of Frederick, his Friends and Family”, which he started to pen in August 2016 during a thunderstorm.
From August to November, 2016 he wrote a total of three books.
“Meet the Family” is the first of a possible four book series.
Donald’s favorite reads are the Bible and anything Sherlock Holmes.

About the Series: The Adventures of Frederick, His Family, and Friends

The Adventures of Frederick, His Family, and Friends

You have subscribed to alerts for Donald R. Zuhlke, Jr.

Would you like to favorite Donald R. Zuhlke, Jr?

You have been added to Donald R. Zuhlke, Jr's favorite list.