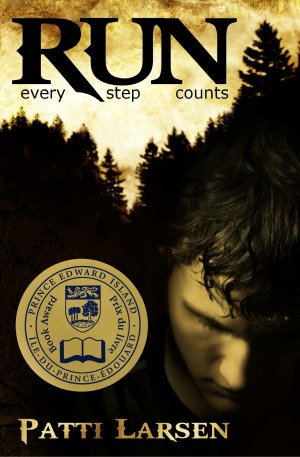 Run (Book One, The Hunted)

By Patti Larsen
Rated 4.00/5 based on 4 reviews
Sixteen-year-old Reid thinks life is back to normal when his sister rescues him from foster care, promising to take care of him. Until he is kidnapped and dumped in the forest with no idea why he is there. He learns to run from the hunters who prowl the darkness, chasing kids like him. And killing them. More
****Winner 2012 PEI Book Awards for Fiction****

Alone, Reid gasps in one deep breath, another. It hurts his ribs, his lungs. He manages to roll over on his right side and regrets it. His shoulder screams in protest. Still, he is finally able to wriggle his numb hands loose from what holds him and claws at the cloth around his eyes.

Darkness. But not complete. The moon is up. Trees loom over him, the smell of spruce and fresh air so sharp it almost hurts. He jerks at the plastic ties around his ankles while. his vision swims through a veil of pain-laden tears. He manages somehow to force his screaming hands to work the ties loose and he is free.

Sixteen-year-old Reid thinks life is back to normal. His sister Lucy pulls herself together and cuts him free from a year of foster care. She promises to take care of him, that her new boss and her new life are what they both needed to start again. Until Reid is taken in the middle of the night, dumped in a wild stretch of forest far from home with no idea why he is there. Lost and afraid, he learns to run from the hunters who prowl the darkness, their only pleasure chasing down kids like him. And killing them.
Available ebook formats: epub mobi pdf rtf lrf pdb txt html
First 10% Sample: epub mobi (Kindle) lrf more Online Reader
pdb
Price: $2.99 USD
Buy Add to Library Give as a Gift
How gifting works
Create Widget
Tags: thriller hunted run ya horror ya thriller patti larsen ya novel
About Patti Larsen

About me, huh? Well, my official bio reads like this: Patti Larsen is a multiple award-winning author with a passion for the voices in her head. But that sounds so freaking formal, doesn’t it? I’m a storyteller who hears character's demands so loudly I have to write them down. I love the idea of sports even though sports hate me. I’ve dabbled in everything from improv theater to film making and writing TV shows, singing in an all girl band to running my own hair salon.

I’ve had my sights set on world literary domination for a while now. Which means getting my books out there, to you, my darling readers. It’s the coolest thing ever, this job of mine, being able to tell stories I love, only to see them all shiny and happy in your hands… thank you for reading.

As for the rest of it, I’m short (permanent), slightly round (changeable) and blonde (for ever and ever). I love to talk one on one about the deepest topics and can’t seem to stop seeing the big picture. I happily live on Prince Edward Island, Canada, home to Anne of Green Gables and the most beautiful red beaches in the world, with my pug overlord and overlady, six lazy cats and Gypsy Vanner gelding, Fynn.

Also in Series: The Hunted

Reviews of Run (Book One, The Hunted) by Patti Larsen

The book is generally well written and fast paced. The issue I have with the book is that there is no closure. The book just ends as a cliffhanger pushing the 2nd book. While I appreciate that the author has given me a couple of hours of enjoyable reading, it is wrong to leave the reader with no real ending. I often reward an author for telling a full story in a series starter by purchasing additional books in the series. For example, I have done this with G. P. Ching's Soulkeepers series and as well as the Lincoln Munroe series by Harrison Drake. I will not be doing that with this series because I felt used at the end. Trust that readers will reward you if you tell a complete story and consider a rewrite that would give it to them.

BEWARE: this is the first book in the trilogy, and as such, the book does not answer a lot of questions at the end.

Reid, a sixteen year old boy, wakes up in the middle of the night to find himself …in a moving van. He does not remember much from the night before. All he knows is that one moment he goes to sleep at his sister’s new house, and the next - he is in a van, kidnapped.

His situation is getting worse by the second. Reid is dropped off in the middle of the woods and left alone. But what seems like possible freedom is, in fact, a cruel game where the rules are simple: run or be killed. Hunters, supernatural cannibalistic creatures, prowl the darkness of the woods, hunting down, killing (and eating) children just like Reid.

To survive this hunt, Reid must run, fight, hide and hope that he will outsmart and outrun the creatures.

1. Run Reid run. The action is intense. The pace is amazing. The title of the book is RUN and believe me, you will run along with Reid. All the way to the last page. My advice: read it when you have a long evening with no plans ahead of you because you will not want to do anything else but read.

2. Twists and turns. Don’t make a mistake thinking that you know where the plot is going. You will be disappointed at yourself. It is a high voltage read, so don’t guess, don’t predict just run read.

3. Reid. I love how fast (almost instantaneously) Reid switches into a survival mode and fights for his life with the wisdom of a grown up. Anyone would definitely feel safe with Reid, a sixteen year old!

What I am not thrilled about:

1. Hunger Games reminiscences. RUN’s setting (children are forced to play a cruel game of survival) reminds me of Hunger Games. Was RUN inspired by Hunger Games? I don’t know. But I definitely get the feeling that it could have been, and because of that, I wish the plot would be a little bit more original.

2. Female Characters. Along his run, Reid meets other children, who are, just like him, also being hunted. He makes friends and enemies. He also meets girls. I was a little hopeful for some romance (I am a sucker for that) but there is none. Understandably, when your life is in danger, the last thing on your mind is romancing another survivor. I am totally okay with it! However, I am slightly disappointed with the female characters because not enough credit is given to the girls. Even though some of the girls manage to survive in the woods on their own for days, they come across much weaker than boys.

Appropriateness: It is a young adult thriller but might be not appropriate for children under 16.

I enjoyed it and would definitely recommend it.

(reviewed 44 days after purchase)
Louise Larsen reviewed on Sep. 11, 2011
(no rating)
I've read "RUN" and really enjoyed it, I am anxiously waiting to get started on "Hide". Very well written and a great imagination.

You know how when you feed a baby, you find yourself opening your mouth at the same time as them, or watching someone give birth on tv you'll find yourself pushing with them?
In reading RUN I found myself out of breath at the end of the book, feeling like I had run with Reid and the kids.
Great book!

Reid thinks he's finally safe and back with his sister, but not all is what it seems. When he is dumped in a dark forest and chased by hunters, only one question matters. Can he run fast enough to stay alive?

This is a brilliant YA paranormal thriller by one of my favorite authors. Her prose and storytelling are amazing and this entire series kept me riveted! A must read for anyone who loves the darker side of YA.

You have subscribed to alerts for Patti Larsen.

You have been added to Patti Larsen's favorite list.

You can also sign-up to receive email notifications whenever Patti Larsen releases a new book.