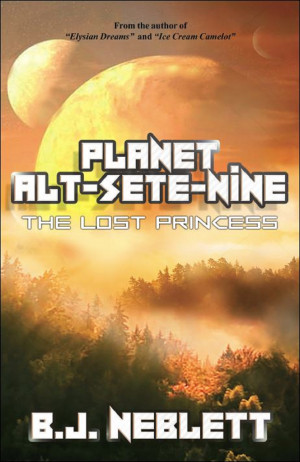 Haylee is drawn deeper into the ground-breaking game by its advanced artificial intelligence, alienating herself from friends and family. Even the renowned Dr. Cochran, a leading expert on video game addiction, is at a loss to explain Haylee’s strange and erratic behavior. As Haylee explores the mystical Planet Alt-Sete-Nine for an elusive princess, Jake frantically searches for a way to hold on to Haylee and her tenuous grasp with reality. Can the powerful Wizardess Azami le Blanc unravel the mystery of the Al-téarièn people? Or will the fierce warrior Cailey be Haylee’s salvation?

BJ Neblett is the author of the highly acclaimed literary fiction romantic adventure Elysian Dreams.
His short stories and poetry have been featured in magazines and anthologies.
Raised in and around the city of Philadelphia, BJ began writing at an early age. For BJ, writing was a way to order his thoughts and to, “Make some sense of the world.” That world was the 1960’s where BJ discovered more than just childhood pleasures and boyhood adventures. He also discovered irony, an irony that seemed to escape those around him. And so BJ wrote. Starting with simple compositions in grade school, he quickly moved on to short stories. With Ray Bradbury and the Twilight Zone and Saturday afternoon matinees as his mentors, BJ wrote about space and friendly aliens and not so friendly things that go bump in the night. Soon discovering the opposite sex, BJ did what any smitten young man would do, he began to write poetry, his work appearing in a national anthology while he was still in high school. And so it continued: during service in the Army; throughout a thirty year career as a radio DJ and a stint working as a for hire cooperate softball gun; while on an extended cross country odyssey of self-discovery, and culminating as a master audio-video tech. BJ has seen and done it all. Today, recalling his corybantic life, BJ is still writing. With one successful novel under his belt, plus several published stories and poems, BJ is hard at work on a sequel to Elysian Dreams; a collection of Fantastic Literature stories; a follow up to Ice Cream Camelot, his historical memoir; and as always, more short stories. When not writing, BJ can always be found on the soft ball mound; kicking back around town with friends; tinkering with his old cars; listening to his extensive record collection, or just relaxing in his Seattle home with one of his vintage guitars.

You have subscribed to alerts for BJ Neblett.

You have been added to BJ Neblett's favorite list.

You can also sign-up to receive email notifications whenever BJ Neblett releases a new book.