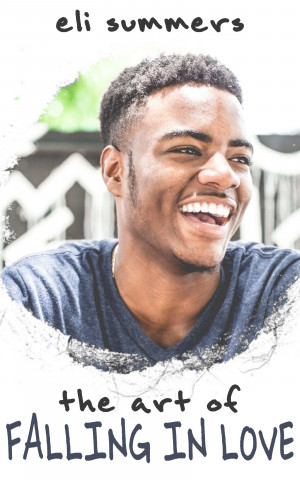 The Art of Falling In Love

Holden struggles in the shadow of his older brother’s success by a father who berates and demeans and a mother who stands back and does nothing while neither one can see the man their son has become or the dreams of the successful man he wants to be. Aaron is expected to take over the auto shop his family has run for generations whether he wants it or not.

When word gets out the two have been seen together, racial and homophobic microaggressions that have been brewing in shadow breach the surface of this small town atmosphere. When big money talks, morality walks, and strong family ties that will break or bind, will this made for each other couple overcome the mounting obstacles or crumble beneath their weight as hard choices and sacrifices must be made?

Eli Summers was born and raised in Saskatoon, Canada. A small city in the middle of the Saskatchewan prairies, it is said you can watch your dog run away for two days straight. The city and the surrounding area make the perfect backdrop for most of Eli's novels. Although he plans on moving to somewhere with a little more mountain, like Kelowna or Banff, he's content to sit in his apartment, drinking coffee and dreaming about what his characters will get up to next. Sometimes he even drives out to the middle of nowhere, lie on the top of his car and watch the stars.

Eli has a knack for turning the copious amounts of caffeine (that no normal human should consume) into #ownvoices novels about boys that love other boys. Sometimes this includes a happy ever after, sometimes it involves tears, and sometimes the characters take the story in a direction even Eli didn't realize would happen.. He adds a generous heaping cup of fluff, love and angst in everything he touches, most of the time on purpose but sometimes his characters make him do it. He wrote his debut novel, The Winter Experience in 2014 and followed up with the sequel The Summer Experience in 2015. He took a hiatus of about three years because his imaginary friends wouldn't talk to him but now he has a new novel, The Art of Falling In Love coming out on August 28, 2018. He is also working on a much different kind of novel that involves the Devil, five chosen warriors and a whole lot of evil. The first episode is expected to come out on January 5, 2019.

When he's not toiling away with word counts and a thesaurus, you can probably find Eli playing video games (Saints Row 2 and Witcher 3 among his favourites), daydreaming about the mountains or cuddling with his House Panther, Salem. He dreams of one day opening a publishing press that serves the LGBT+ community with a place to get their books out to the world.

You have subscribed to alerts for Eli Summers.

You have been added to Eli Summers's favorite list.

You can also sign-up to receive email notifications whenever Eli Summers releases a new book.