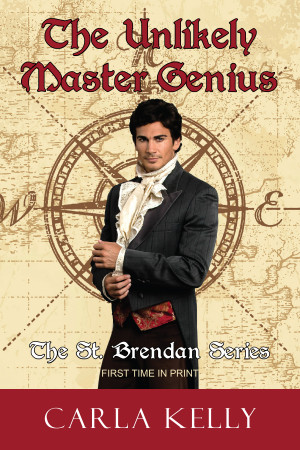 By Carla Kelly
Rated 5.00/5 based on 1 reviews
Thanks to his extraordinary intelligence, Able Six survived the workhouse to become a sailing master in the Royal Navy. Forced by the Treaty of Amiens to seek new work, Able brings his new bride to the St. Brendan's School in Portsmouth, England, where he will teach young boys plucked from the workhouse to be trained as navigators. More
Sailing Master Able Six, Royal Navy, is a man like no other. To call him a mere polymath is to sell him short. Someone with his extraordinary gifts should rise to the top, unless it is the 1800s, where pedigree and money govern Regency society, as sure as Napoleon seeks world domination. A bastard raised in a Scottish workhouse with nothing in his favor except his amazing mind, Able must navigate life ashore on half-pay during the uneasy Truce of Amiens, and find a way to provide for his charming bride Meridee Bonfort, a gentlewoman to be sure, but lacking a dowry. Assisted by two sea captains acquainted with his startling abilities, Able finds himself teaching mathematics and seamanship at St. Brendan the Navigator School, which is itself an experiment, taking boys like Able from workhouses and training them to serve the fleet in wartime. Meridee has agreed to invite four lads who need extra attention into their home in raffish, unsavory Portsmouth. Calling themselves the Gunwharf Rats, these St. Brendan lads show promise in an unpromising world. Can a sailing master-turned-teacher uncover their potential? Can Meridee find a way to nurture young hearts bruised too soon by life? What will happen when war breaks out again? And what is it about Able Six, the unlikely master genius? Volume One: The St. Brendan Series.

A well-known veteran of the romance writing field, Carla Kelly is the author of thirty-one novels and three non-fiction works, as well as numerous short stories and articles for various publications. She is the recipient of two RITA Awards from Romance Writers of America for Best Regency of the Year; two Spur Awards from Western Writers of America; two Whitney Awards, 2011 and 2012; and a Lifetime Achievement Award from Romantic Times. Carla’s interest in historical fiction is a result of her lifelong study of history. She has a BA in Latin American History from Brigham Young University and an MA in Indian Wars History from University of Louisiana-Monroe. She’s held a variety of jobs, including public relations work for major hospitals and hospices, feature writer and columnist for a North Dakota daily newspaper, and ranger in the National Park Service (her favorite job) at Fort Laramie National Historic Site and Fort Union Trading Post National Historic Site. She has worked for the North Dakota Historical Society as a contract researcher. Interest in the Napoleonic Wars at sea led to a recent series of novels about the British Channel Fleet during that conflict. Of late, Carla has written two novels set in southeast Wyoming in 1910 that focus on her Mormon background and her interest in ranching.

Perhaps the darker side of Regency times but well written and worth reading.

You have subscribed to alerts for Carla Kelly.

You have been added to Carla Kelly's favorite list.

You can also sign-up to receive email notifications whenever Carla Kelly releases a new book.