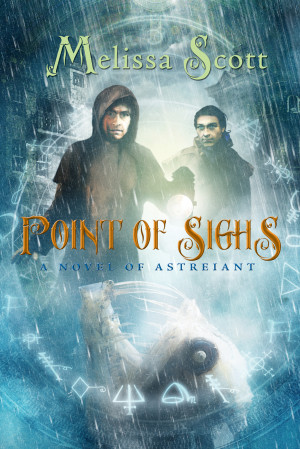 The murder of a tea captain brings to a head the rivalry between Point of Sighs, where the crime took place, and Point of Dreams, where Eslingen’s lover, Adjunt Point Nicolas Rathe, doubts the evidence against the son of a prominent Dreams merchant house. As extortion against traders by the dockers of Point of Sighs and corruption among the district pointsmen come to light, the mystery deepens, but nothing can prepare Rathe and Eslingen for the return of a legend and the revival of a savage cult.

Centuries ago the hungry spirit that haunted the River Sier was propitiated by the ritual sacrifice of handsome young man, but the Riverdeme has long been bound by the city’s bridges. Now the river seethes with vicious dogfish, mauled corpses are pulled from the water, and Eslingen—peculiarly at risk from any watery threat—and Rathe must uncover the person who seeks to unleash an ancient evil.


Melissa Scott studied history at Harvard College and Brandeis University, and earned her PhD. in comparative history. She published her first novel in 1984, and has since written some two dozen science fiction and fantasy works, including three co-authored with her partner, Lisa A. Barnett.
Scott’s work is known for the elaborate and well-constructed settings. While many of her protagonists are gay, lesbian, bisexual and transgender, this is perfectly integrated into the rest of the story and is rarely a major focus of the story. Shadow Man, alone among Scott’s works, focuses explicitly on issues of sexuality and gender.
She won the John W. Campbell Award for Best New Writer in Science Fiction in 1986, and has won several Lambda Literary Awards.
In addition to writing, Scott also teaches writing, offering classes via her website and publishing a writing guide.
Scott lived with her partner, author Lisa A. Barnett, in Portsmouth, New Hampshire for 27 years, until the latter’s death of breast cancer on May 2, 2006.

About the Series: The Novels of Astreiant

Astreiant, dominant power of a world in which the technology is Renaissance level, the sciences are magical, the choices in life partners are unrestricted by race or gender, and the suns are two. Appropriately, these genre-bending mysteries centered on crimes that were possible only in the world of Astreiant. And, as you’d expect of good mysteries, the crimes revealed character–especially that of the two leads, Astreiant-born Adjunct Point (police sergeant) Nicholas Rathe and foreign-born ex-soldier Philip Eslingen, who evolve over the course of the novels from strangers, to crime-solving allies, to cohabiting lovers.

Also in Series: The Novels of Astreiant

Reviews of Point of Sighs by Melissa Scott

You have subscribed to alerts for Melissa Scott.

You have been added to Melissa Scott's favorite list.

You can also sign-up to receive email notifications whenever Melissa Scott releases a new book.