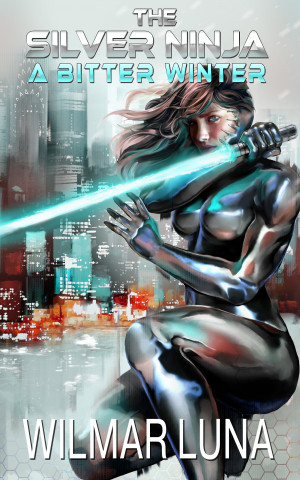 By Wilmar Luna
A disgraced cop takes matters into her own hands when the murderer who killed her partner comes after her family. To stop him, Cindy Ames fuses with a prototype suit and transforms herself into a superhero.

But the suit has a mind of its own and is determined to execute its hidden agenda. More
As the Manhattan snow fell on her shoulders, Cindy Ames stared in disbelief at her bloodstained hands. Her fingers ached from violence. All she wanted was revenge for what happened to her sister.

She stole a prototype suit and absorbed its incredible power. With it, she tore through criminals and terrorists in search for the killer who ruined her life.

But something went horribly wrong.

The red liquid pooling in her hands didn't belong to her or the criminals. The suit has taken control of her mind and is using her body to fulfill its own purposes. The puppet has become the master, and the hero has become the monster. Can she regain control before she takes another innocent life?

A Bitter Winter is book 1 of The Silver Ninja series.

This is the ONLY action packed superhero fantasy that will show you the consequences of being a hero. And only Wilmar Luna could tell it.

"It's refreshing to read about a character (especially a female superhero), who isn't perfect and has actual problems she must overcome." - Kitiera Morey, Author of Meant to Bleed.

"Wilmar Luna has taken the usual superhero saga and deconstructed it, shattering any expectations of the ordinary lawful good hero. Cindy isn't quite an anti-hero, but she is certainly not playing things by the rules." - Valerie, Cats luv Coffeez blogspot.

From the time he put on Superman pajamas and leapt off a flight of stairs, Wilmar Luna has been captivated by stories of heroes saving the day. As he grew older, his fascination with 90's pop culture, video games, and movies filled his overactive imagination with fantastical worlds and legendary heroes.

He found an outlet for his creativity by studying video editing and motion graphics design at Mercer County Community College. After graduating in 2008, he freelanced throughout New York City and has edited numerous indie films, freelanced for the NFL, and also worked with the cinematics team at Rockstar Games. He assisted with the launch of Grand Theft Auto V and was also involved in the creation of cutscenes for Red Dead Redemption 2.

After years of watching his name scroll in other people’s credits (please don’t remove me), Wilmar wanted to develop his own projects and ideas. He decided that if he wanted to tell stories of empowered female characters, paranormal detectives, and ghost stories, he would have to venture off on his own.

Wilmar published his first novel in 2012 and his second in 2014. He also published several horror short stories on Wattpad, as well as concept ideas for a gothic fantasy novel. In 2018, Wilmar completed his novel The Silver Ninja: A Bitter Winter, fulfilling his childhood dream to create an empowered, independent, brand new superheroine for a generation of readers hungry for new stories.

About the Series: The Silver Ninja

The Silver Ninja is a Sci-fi / Action fantasy about a woman who fuses herself with an experimental suit which grants her incredible super powers.

Based in modern day New York City, The Silver Ninja begins as a tale of revenge and gradually evolves into a story of a woman who sacrifices everything in order to prevent World War Three.

Throughout her journey, Cindy Ames becomes embroiled in a conspiracy to control the world through social media, fake news, and puppet governments. She will need to recruit allies and overcome her own personal demons in order to cut the strings of the puppet masters controlling the world.

Also in Series: The Silver Ninja

Reviews of A Bitter Winter by Wilmar Luna

You have subscribed to Smashwords Alerts new release notifications for Wilmar Luna.

You have been added to Wilmar Luna's favorite list.

You can also sign-up to receive email notifications whenever Wilmar Luna releases a new book.