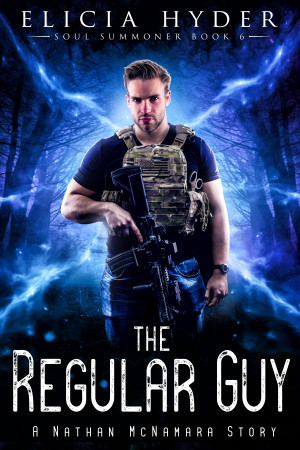 By Elicia Hyder
The Regular Guy: A Nathan McNamara Story is the 6th Book In The Soul Summoner Series More
They say the best things come to those who wait, and no one hopes that's true more than Special Operations Commander, Nathan McNamara.

For over a year, he's put his life, his career, and his mother's hopes for more grandchildren on hold to dive headfirst into a world he never knew existed. A world full of angels, demons, and enough sexual frustration to crack the Pope.

But all that is supposed to be behind him, and his future looks bright and full of possibilities. That is, until a familiar chill ripples the atmosphere--and a supernatural thunder rumbles over the mountains.

PLEASE DO NOT TRY TO READ THIS AS A STANDALONE. This book will spoil the series if you haven't read it.

**The 6th Book In The Soul Summoner Series**
Book 0 - The Detective
Book 1 - The Soul Summoner
Book 2 - The Siren
Book 3 - The Angel of Death
Book 4 - The Taken
Book 5 - The Sacrifice
Book 6 - The Regular Guy
Available ebook formats: epub
Price: $3.99 USD
Buy Add to Library Give as a Gift
How gifting works
Create Widget
Tags: angels and demons the soul summoner
About Elicia Hyder

In the dawning age of scrunchies and ‘Hammer Pants’, a small town musician with big city talent found out that she was expecting her third child a staggering eleven years after her last one. From that moment on, Susie Waldrop referred to her daughter, Elicia, as a ‘blessing’ which is loosely translated as an accident, albeit a pleasant one.

In true youngest-sibling fashion, Elicia lived up to the birth order standard by being fun-loving, outgoing, self-centered, and rebellious throughout her formative years. She excelled academically–a feat her sister attributes to her being the only child who was breastfed–but abandoned her studies to live in a tent in the national forest with her dogs: a Rottweiler named Bodhisattva and a Pit Bull named Sativa. The ensuing months were very hazy.

In the late 90’s, during a stint in rehab, Elicia was approached by a prophet who said, “Someday you will write a book.”

Now a firm believer in the prophetic word, Elicia Hyder is a full-time writer and freelance editor living in middle Tennessee with her husband and five children. Eventually she did make it to college, and she studied literature and creative writing at the American Military University.

Her debut novel, The Bed She Made, is very loosely based on the stranger-than-fiction events of her life.

You have subscribed to alerts for Elicia Hyder.

You have been added to Elicia Hyder's favorite list.

You can also sign-up to receive email notifications whenever Elicia Hyder releases a new book.