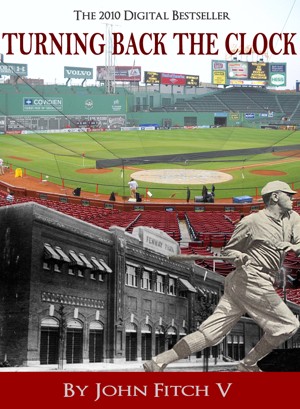 Turning Back The Clock

By John Fitch V
Greg Patterson has just watched his beloved Boston Red Sox lose to the New York Yankees in the 2003 American League Championship Series, when he gets a radical idea: Build a time machine to make sure that one of baseball history's worst sales - the sale of Babe Ruth - never happens. But as he's researching out that fateful event, he runs along another piece of info that he had never known.

Born in the city of Fitchburg, Massachusetts, in 1977, Fitch's love of fantasy began 11 years later when he was handed J.R.R. Tolkien's classic The Hobbit. His passion for writing began in 1993, as a sophomore in high school, when he began to write sports for his local newspaper, the Sentinel & Enterprise. Since then, he has written for several Massachusetts newspapers, including the Telegram & Gazette of Worcester and the Southbridge Evening News in Southbridge. He has since returned to where it all started, as he came back to the Sentinel in April 2008. He also strings for the Springfield Republican and Turley Publications.

You have subscribed to alerts for John Fitch V.

You have been added to John Fitch V's favorite list.

You can also sign-up to receive email notifications whenever John Fitch V releases a new book.