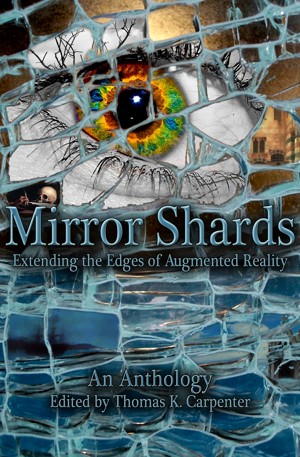 In this glimpse of possible futures, you will go on the hunt to track down a fugitive on the other side of the known Universe. Learn the price of ubiquitous knowledge, or find peace and understanding in the absence of it. Dive deep into the ocean to avert a kidnapping using only the tools at hand. Experience new realities underwritten by an alien love of entertainment. Find hidden truths contained within our smallest gestures. Hide something so valuable, it would drive a man to crime. Or find that sometimes, what it doesn’t hide is what endangers us most.
Available ebook formats: epub mobi pdf lrf pdb txt html
First 20% Sample: mobi (Kindle) lrf pdb Online Reader
Price: $4.99 USD
Buy Add to Library Give as a Gift
How gifting works
Create Widget
Tags: anthology science fiction augmented reality the digital sea
About Thomas K. Carpenter

Thomas K. Carpenter resides in Colorado with his wife Rachel. When he’s not busy writing his next book, he's out hiking or skiing or getting beat by his wife at cards. Visit him online at www.thomaskcarpenter.com, or sign up for his newsletter at https://www.subscribepage.com/trialsofmagic.

Reviews of Mirror Shards: Volume One by Thomas K. Carpenter

"Mirror Shards: Volume 1" is an anthology of thirteen short science fiction stories, edited by Thomas K. Carpenter who also contributed one of the stories. The stories themselves have been written by a variety of authors and all of them included some aspect of Augmented Reality. For those of you that don't know, Augmented Reality is the process of utilising technology to enhance and expand upon what we see in the real world.

Whilst this common element is present in each story, the way in which the individual authors have used it does vary quite substantially. This means that the stories themselves are all very different in style and substance. For example, whilst one story may be a fast paced thrill ride, the next would be poignant and thoughtful. I felt that this ensured the reader would not get bored as they read through the stories. Quite simply, the collection really does provide an enjoyable taste of what Augmented Reality could be used for in the future, both the positive and negative.

The positive sides of Augmented Reality are specifically shown in the story, "Of Bone and Steel and Other Soft Materials" which is an exciting and action packed look at a woman utilising the technology to try and survive an encounter with a Russian crime syndicate. Another story that touched on the more positive aspects is "Gift Horses" is an enjoyable journey that follows the attempts to overthrow a corporate dictatorship.

"Bellow the Bollocks Line" however really highlights some of the more negative aspects with a short but amusing look at advertisers hurtling constant commercials at people who are given no real way to avoid them. This is then supported by "The Sun is Real" which is one of my favourites in the collection and follows a prisoner of war who is subjected to unusual forms of torture and subterfuge that Augmented Reality could be used to inflict.

The story I enjoyed the most however in the collection has to be "The Cageless Zoo" by Carpenter himself which was very reminiscent of Jurassic Park. The story is based around a woman and her two children visiting a zoo which has utilised Augmented Reality in a rather novel way to ensure the various predators living there don't see the people and therefore won't try to attack them. Of course things quickly go wrong and a thrilling adventure unfolds as the family tries to escape the zoo.

Overall, Carpenter has pulled together an enjoyable and satisfying collection of science fiction stories that look at Augmented Reality from many different perspectives. The entertaining mix of styles, ideas and pacing kept me hooked and I am looking forward to further instalments in the series and reading other literature by the authors included. I highly recommend this to fans of speculative fiction and those interested in the future of Augmented Reality.

Much like Carpenter's novel, The Digital Sea, the stories in this anthology all have augmented reality (AR) as a common element integral to each story. However, how each author incorporates AR into their story is as varied as the authors themselves. It would be difficult to provide a detailed analysis of all 13 stories so I will provide a taste of each.

We're shown how a submarine pilot guides a gaggle of tourists in the depths of the Indian Ocean in "The Watcher" and jacked in with a bio-engineered assassin dropped on a distant ring world in "El Matador".

AR is a positive force that advances the effectiveness of smart detectives in "Witness Protection" while helping a young woman survive an encounter with a crime syndicate in the cold of eastern Russia in "Of Bone and Steel and Other Soft Materials". It enables a singer to adopt new personas while Earth is under the boot of alien overlords in "Stage Presence, Baby". And it enables revolutions in the corporate dictatorship of "Gift Horses".

The darker side of AR is explored as well. It is used to bring about an advertizing apocalypse in "Below the Bollocks Line" and adds a new dimension to imprisonment in "The Sun is Real." It fosters the ugliness of narcissism in "A Book By Its Cover".

Some stories balance the two. It props up the ego of the actors in "These Delicate Creatures" but also restores their humanity when art becomes protest. And in the sexual slavery of "More Real Than Flesh" it provides an escape hatch.

I have to say that there isn't a bad story in the bunch but I was still able to pick out two stellar stories that rose above the rest: "Music of the Spheres" and "The Cageless Zoo".

"Music of the Spheres" is probably the best math story I've ever read. A math major helps his sister with her geometry homework and it doesn't come across as dull, instead it turns into a lesson she has to teach him later in life. The underlying theme is about what happens to those who are left behind when AR takes over society. The author, Ken Liu, poignantly shows how one can cope with watching dreams die.

My favorite is Carpenter's own, "The Cageless Zoo", which is about a widow and her two children visiting a zoo full of predators who are kept from eating people by AR implants. The mother is confronted by a zoo official who demands a copy of her late husband's research, which she doesn't want to surrender for fear of it being buried by the Darwin Institute. Not only does Carpenter's story present us with a unique use for AR but it provides us with an excellent demonstration for how epigenetics could work in nature on a fictional beast. But forgetting the science for a moment, it was a fun read along the lines of Jurassic Park, but without the dinosaurs.

Carpenter has amassed a diverse collection of highly entertaining and thought provoking AR stories in Mirror Shards, Volume 1. As with all good anthologies, I now have another list of talented writers whose works I can explore further. I look forward to the next installment of this series. Highly recommended for all sci-fi fans.

You have subscribed to alerts for Thomas K. Carpenter.

You have been added to Thomas K. Carpenter's favorite list.

You can also sign-up to receive email notifications whenever Thomas K. Carpenter releases a new book.