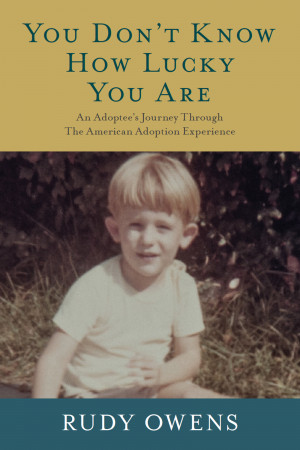 You Don't Know How Lucky You Are: An Adoptee's Journey Through The American Adoption Experience

By Rudy Owens
Rudy Owens’s memoir, You Don’t Know How Lucky You Are, weaves his successful journey of self-discovery as an adoptee with public health, historic, and scientific research. His quest for his identity and justice reveal how biology, kinship, and discrimination still shape the U.S. adoption system, one of the greatest social-engineering experiments in U.S. history. More
Nearly 50 years after he was relinquished for adoption, Rudy Owens finally met his biological half-sister in San Diego. The meeting inspired him to tell his adoption story set against the larger adoption narrative that has impacted millions of adoptees, their birth parents, and their collective biological and adoptive families. Owens’s story examines the American institution of adoption, a national social-engineering experiment that remains mired in discriminatory laws and partisan politics, not equality and fairness.

Owens’s lifelong journey as an adoptee started in the mid-1960s, with his birth in a Detroit hospital created to serve socially scorned single mothers and place their infants for adoption. Twenty-four years later, he met his birth family and learned of his biological family history. It would take him another quarter century to win a bitter legal battle against the State of Michigan to release his sealed birth certificate that it illegally held for decades.

Owens ultimately answered life’s essential question, “Who am I?” Owens’s lifelong quest for his original birth records, full equality before the law, and his ancestral history ultimately gave him the makings of a meaningful life.

Rudy Owens is a Detroit native who grew up in the Midwest and attended public schools in University City, Missouri, just outside of St. Louis. He spent most of his adult life in the West Coast states of Oregon, Washington, and Alaska. He has a professional background in communications, international relations, and public health. He earned a master’s degree from the University of North Carolina at Chapel Hill in journalism and a master of public health degree from the University of Washington School of Public Health. Owens has worked as a reporter, editor, and political and public affairs officer for the Government of Canada. Owens also has worked in community-based public health in Washington State. Owens has been blogging about current affairs, policy, and public health issues since 2012. You Don’t Know How Lucky You Are is his first nonfiction work. Owens currently lives in Portland, Oregon.

You have subscribed to alerts for Rudy Owens.

You have been added to Rudy Owens's favorite list.

You can also sign-up to receive email notifications whenever Rudy Owens releases a new book.