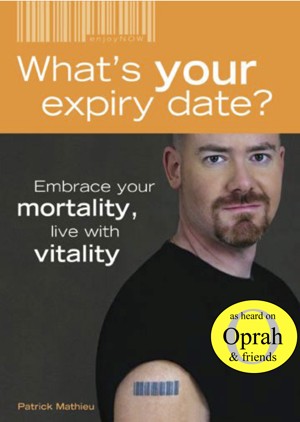 What's Your Expiry Date? Embrace Your Mortality - Live with Vitality

In time, he turned his death sentence into an early wake-up call. But not before facing the ultimate reality: We are all mortal.

Patrick Mathieu believes that his mission in life is to help people live lives that are fearless, focused and free from regrets. He has been a motivational keynote speaker since 2003, been featured in a full-length documentary film and appeared on numerous television and radio programs, including an hour-long interview with Dr. Oz on Oprah & Friends.

Patrick's first book "What’s Your Expiry Date? Embrace Your Mortality – Live With Vitality" has received widespread acclaim and has helped countless people to change their lives for the better. He is an in-demand keynote speaker and conducts workshops and weekend retreats. Patrick is also a Certified Master Coach Trainer with the Certified Coaches Federation™.

Reviews of What's Your Expiry Date? Embrace Your Mortality - Live with Vitality by Patrick Mathieu

You have subscribed to alerts for Patrick Mathieu.

You have been added to Patrick Mathieu's favorite list.

You can also sign-up to receive email notifications whenever Patrick Mathieu releases a new book.