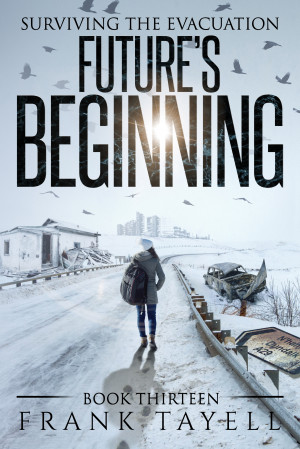 By Frank Tayell
After the outbreak came the nuclear war. The blasts killed millions. Chaos followed. Most of those unlucky enough not to succumb to starvation and disease joined the ranks of the living dead. Nine months later, humanity has been reduced to ten thousand souls in two increasingly precarious communities on the island of Ireland. Set in Belfast and Dundalk, over three days that change everything. More
For good or ill, the future has begun.

After the outbreak came the nuclear war. The blasts killed millions. Chaos followed. Most of those unlucky enough not to succumb to starvation and disease joined the ranks of the living dead.
Fleeing the impossible nightmare, ten thousand, from nations across the Atlantic seaboard, found refuge on the Welsh island of Anglesey. There, they should have been safe. There, they should have been able to rebuild. There, they were betrayed.
Forced to flee once more, a hasty exodus was planned, but those plans were sabotaged. The survivors became scattered across the island of Ireland. Old-world supplies are scarce, hope is running out, and safety is just a memory. The snow has come, and though rain will soon follow, winter has truly begun.
In Dundalk, eight hundred survivors have occupied a local college, but the campus is too dispersed to defend. As they scour the snow-covered town for a safe route to the sea, they find signs of long-fled survivors and answers to a question they hadn’t asked.
In Belfast, the situation is increasingly precarious. There are saboteurs in their midst. As the investigation into their identity slowly progresses, the terrorists continue to plot. Rumours of a mutiny escalate into a riot, while an unseen clock ticks ever closer towards humanity’s destruction.

Set in Belfast and Dundalk, over three days that change everything.

Price: $3.99 USD
Buy Add to Library Give as a Gift
How gifting works
Create Widget
Tags: post apocalyptic nuclear war survival horror zombie apocalypse dystopian thriller after the end of the world after the fallout longrunning series
About Frank Tayell