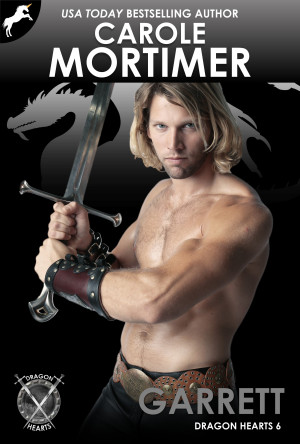 By Carole Mortimer
Garrett finding out his fated mate is wanted by the Russian bratva is bad enough, but knowing his brother Grigor also wants her dead, after Billie tried to kill his fated mate, makes the situation much more complicated. It doesn't help that Billie isn't interested in Garrett or in being his fated mate. More
GARRETT is the 6th book in USA Today and Amazon #1 Bestselling Author, Carole Mortimer’s, paranormal dragon shifter series, DRAGON HEARTS.

Author’s Note: Beware of very sexy alpha dragon shifters on the hunt for their fated mates!

Garrett Pendragon and his seven brothers are all Welsh dragon shifters. He's been alive for over sixteen hundred years, fighting alongside his brothers through the centuries, and enjoying as many beautiful women as he could along the way. Five of his brothers might have found their fated mates in the last year but Garrett is more than happy to live another sixteen hundred years exactly as he has been, thank you very much.

That all changes the moment he meets Billie Rider and recognises her as his fated mate.

Except his beautiful mate has been sentenced to die, for having attempted to kill Gayle, his brother Grigor’s fated mate, and stealing from the Russian bratva. Both under instruction from the Romanian mafia, who are also now anxious to eliminate her.

But things aren’t always what they appear to be, and it’s up to Garrett to prove Billie’s innocence, to his brothers and the Russian bratva, if he wants their help keeping his mate alive.

Garrett isn’t sure which is going to be more difficult, saving Billie from all the people that want her dead, or convincing this feisty woman she’s his fated mate.

Carole Mortimer has written almost 240 books, in paranormal romance, contemporary romantic suspense, and Regency romance. She became an indie author in 2014. In May 2017 she received a Career Achievement Award from Romantic Times. She is the Recipient of the 2015 Romance Writers of America’s Lifetime Achievement Award. An Entertainment Weekly Top 10 Romance Author—ever. 2014 Romantic Times Pioneer of Romance. She was also recognized by Queen Elizabeth II in 2012, for her “outstanding service to literature”.

About the Series: Dragon Hearts

Dragon Hearts is my new paranormal series, set in the Welsh mountains, and featuring dragon shifters.