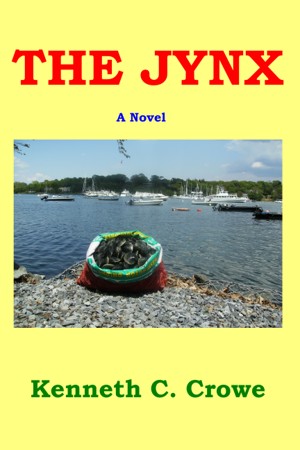 Rated 4.00/5 based on 1 review
THE JYNX is a novel of clamming, art, Swiftboat politics, and revenge in the age of Karl Rove. The protagonist of THE JYNX is a Long Island clammer, barely surviving in a dying industry, whose dream is to become a successful wood sculptor. A political operative is the protagonist’s inspiration for The Jynx, a sculpture which advances his career and turns her into a vengeful enemy.
Download: epub mobi (Kindle) pdf more Online Reader
rtf lrf pdb txt
Price: Free! USD
Add to Library
Create Widget
Tags: clamming guardian angel huntington bay huntington clammer sculptor wood sculptor swiftboat darts revenge conservative politics greed karl rove swiftboating careerism
About Kenneth Crowe

Kenneth C. Crowe was a labor reporter at Newsday and New York Newsday from 1976 to 1999. He is the author of COLLISION/HOW THE RANK AND FILE TOOK BACK THE TEAMSTERS. Published by Scribner's in 1993, COLLISION tells the story of the Teamsters' rank and file reform movement, culminating in the election of Ron Carey as president of the union.
Crowe won an Alicia Patterson Foundation Fellowship in 1974 to study foreign investment in the United States. In 1978, Doubleday published AMERICA FOR SALE, Crowe's book on foreign investment in the United States.
Crowe was a member of the Newsday investigative team whose work won the 1970 Pulitzer Prize Gold Medal.

Reviews of The Jynx by Kenneth Crowe

Up to the minute gender-reversed romance novel. A good read, well worth the time. You can almost name the major players, especially if you are a fan of faux-news.

You have subscribed to Smashwords Alerts new release notifications for Kenneth Crowe.

You have been added to Kenneth Crowe's favorite list.

You can also sign-up to receive email notifications whenever Kenneth Crowe releases a new book.