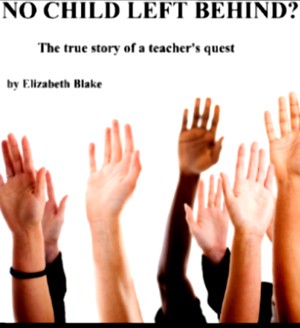 No Child Left Behind??? The True Story of a Teacher's Quest

By Elizabeth Blake
Rated 4.00/5 based on 1 reviews
Dramatic yet hopeful memoir of teaching at-risk students. If you liked the movie "Dangerous Minds" with Michelle Pfeifer, you'll like this book. Compelling true story of one teacher's quest to leave no child behind. Blake's search for her pupose in life leads her to teach science in inner-city school. But will the stress overcome her love of teaching?

Elizabeth Blake worked 20 years as a Med Tech in a medical science laboratory before switching to teaching science to at-risk high school students. She has written many published short stories that have appeared in various Christian magazines and anthologies such as Guideposts. She wrote a memoir about the joys of teaching and the obstacles she fought such as abusive principals, gangs, shootings, a riot, murdered students.
Elizabeth lives in Arizona with her husband and enjoys writing, walking, and playing with her grandchildren.

Elizabeth Blake's story, as recounted in the pages of her book, is one throughout which I was constantly asking "What next!?". The events she describes sometimes beggar belief. I found myself incredulously thinking "How could people in responsible positions behave like that?" only to find, on subsequent pages, there was worse to come. That Elizabeth found ways to deal with the many difficult situations she encountered, to push herself further than many would have gone, and not to give up without a fight in the face of overwhelming adversity, is a testament to her strength of character.

The book may be in need, here and there, of a good editor's attention - it's a little rough around the edges in places - but what it lacks in polished writing is made up for in the content of her absorbing story. I constantly wanted to know what happened next.

I feel I should also point out that those who don't share Elizabeth's belief that a god (she spells it with a capital G) has a plan for every individual, might find her assertions in that area a little off-putting. But whatever a person's beliefs may be, there is no denying that Elizabeth's helped her not only deal with some very difficult situations at the time, but also enabled her to find a way to continue doing her utmost to ensure that no child she taught was left behind, even though, despite having sometimes gone an extra five miles, let alone one, she was not always successful.

Whatever else you may get from reading her book, Elizabeth's personal story shows that there is hope for humanity.

You have subscribed to alerts for Elizabeth Blake.

You have been added to Elizabeth Blake's favorite list.

You can also sign-up to receive email notifications whenever Elizabeth Blake releases a new book.