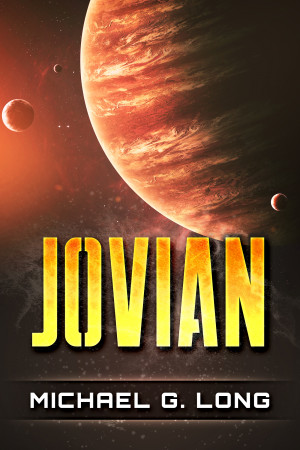 By Michael G. Long
Rated 5.00/5 based on 1 reviews
Corbin Bishop and Kora are part of an elite group of professionals know as Divers. They hunt a dangerous alien prey in the atmosphere of gas giant planets. After being reunited on a dive after years apart, they soon find themselves fighting for their lives. What they encounter will reshape their understanding, not only of their prey, but of humanity's potential for the future. More
It has been hundreds of years since the human race departed Earth and spread among the stars. In that time it has colonized many worlds and star systems. Humans first encountered extraterrestrial life in the most unlikely of places, the atmosphere of gas giants. As humanity expanded they were surprised to find this same species of life inhabiting almost all similar planets across distant star systems. A discovery that was soon to be exploited.

Corbin Bishop is the most accomplished Diver in the history of his profession. A profession that is among the most dangerous but most lucrative in the Galactic Federation. Plunging headlong into the atmosphere of gas giant planets in pursuit of an alien prey takes courage, skill, and a lot of luck. On one such dive, while reunited with his former student and friend, Kora, on a planet at the outer reaches of the federated systems, he and his elite team encounter more than they bargain for. When things start to go wrong, a routine dive turns into a fight for survival. What they encounter will forever change their understanding of the complexity and diversity of life with far reaching implications for the future development and evolution of the human race.
Download: epub mobi (Kindle) pdf more Online Reader
lrf pdb txt
Price: Free! USD
Add to Library
Create Widget
Tags: fiction scifi adventure action science fiction aliens space scifi action fiction sci fi
About Michael G. Long

Michael G. Long is a long time resident of the Pacific Northwest. Born in Alaska, raised by bears, then domesticated and finally relocated to the lower forty-eight. He now spends his time researching and writing about anything to do with science and the future of humanity.

Because of his early experience in the wild, his primal side lends to an adventurous nature that is often incorporated into the characters of his stories. With a disposition that originates from outside of the general human population, the idea of mundane and monotonous day to day activities is something of little interest to Michael. On the other hand, if there is a stimulating and intellectual conversation afoot about the development of new technologies, cutting edge physics, the expansion and evolution of consciousness, and the origins of humanity or its future, then he will be ready and willing to engage.

Though sometimes reluctant to be associated with his fellow humans, he enjoys socializing with good and interesting people, healthy doses of sarcasm, consuming gourmet foods, craft beer, and single malt whiskey. Something that was denied him when roaming the Alaskan wilderness as a young cub.

The wild still calls and Michael admits to feeling, at times, trapped by the confines of a society where freedom favors those with money and limits those without. A concept that deeply troubles him and that is not present in nature. Despite some of the more frustrating aspects of civilization, he admits, that being domesticated does come with some perks. In particular, hot showers, Netflix, and of course single malt whiskey (preferably at least 12 years old).

Ultimately Michael is an optimist. One thing we can all do to help each other succeed, he says, is to move forward together, with kindness, understanding, and open hearts and minds. He also says that the world is dark, dangerous, and full of people ready to knock you down, but don't worry, that's what makes it an adventure.

To sum up "Jovian" in a word, I would have to say, "interesting". The story is captivating, I'm not usually one for novella's but this one kept me engaged and wanting to know how it was going end. For the author's first work I have to say this is pretty great! Hopefully Long will release more, I am curious to see what will be explored in further work!

Very worth the read for sci-fi lovers.

You have subscribed to alerts for Michael G. Long.

You have been added to Michael G. Long's favorite list.

You can also sign-up to receive email notifications whenever Michael G. Long releases a new book.