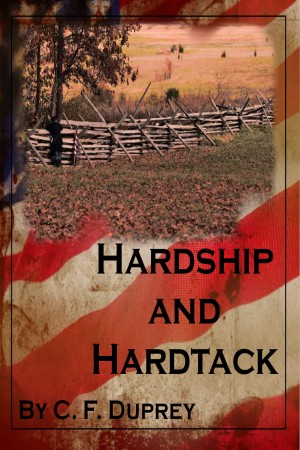 By CF Duprey
Richard Bassett leaves his farm, his wife and two little boys to join the army in order to preserve the Union, not knowing that four weeks into his service, he'll be a prisoner of war and unfairly branded a coward.

Based on the letters the very real Richard sent home to his wife during his first year of service, HARDSHIP AND HARDTACK details his struggle to survive in a time of turmoil. More
Like most Northerners, Richard Bassett expected the war between the Union and the rebel states to be over quickly. When it isn’t and President Lincoln puts out another call for volunteers, Richard leaves his farm, his wife and his two young boys and goes to do his part. Erasmus, his younger brother, goes with him on the grand adventure that is preserving the Union.

Only, a month into their service, still green and only partially trained, they’re thrust onto the front lines of a battle that will brand them forever. When their general surrenders them to the Confederates, Richard wonders if he’ll ever see home or battle again.

HARDSHIP AND HARDTACK follows the 126th New York Volunteer’s first year of service in the Union Army and is based on the letters the very real Richard Bassett sent home to his wife, Mary. He details life as a prisoner on parole, their subsequent return to active service and the painful waiting as their names are dragged through the mud and their reputations unduly tarnished. It is not until nearly a year has passed that redemption comes in the form of another battle—at Gettysburg, Pennsylvania.
Available ebook formats: epub mobi pdf rtf lrf pdb txt html
First 15% Sample: epub mobi (Kindle) lrf more Online Reader
pdb
Price: $5.99 USD
Buy Add to Library Give as a Gift
How gifting works
Create Widget
Tags: civil war prisoner of war new york american history gettysburg harpers ferry 1862 army of potomac picketts charge

Reviews of Hardship and Hardtack by CF Duprey

You have subscribed to Smashwords Alerts new release notifications for CF Duprey.

You have been added to CF Duprey's favorite list.

You can also sign-up to receive email notifications whenever CF Duprey releases a new book.