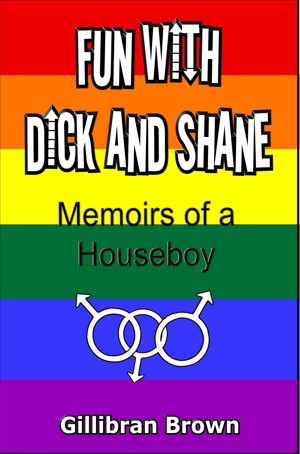 Fun with Dick and Shane: Memoirs of a Houseboy

Rated 4.88/5 based on 8 reviews
‘Fun with Dick and Shane’ introduces Gillibran Brown, a houseboy with the gift of the gab.

Gilli shares a unique relationship with his partners Dick and Shane. The book deals with everyday life, love and discipline in a gay ménage à trois.

Reviews of Fun with Dick and Shane: Memoirs of a Houseboy by Gillibran Brown

I didn't expect to get sucked into this book. One moment I was trying out the first few pages, several hours later it was past my bedtime. This is a fun read - even when you're groaning, knowing Gilli is about to do something impulsive.

I really love the book and through it I loved the author.

(reviewed the day of purchase)
beginstomorrow reviewed on July 23, 2014

Brilliant. A pure joy to read. Check the free sample and you'll see for yourself. Moving onto the next book in the series presently.

(reviewed the day of purchase)
Michael Joseph reviewed on Oct. 30, 2011

This is the biggest surprise I've had for quite some time. I was expecting a bit of light fluff, and while there's lots of humor in the author's breezy first-person account of the 'adventures' of a 24 year-old houseboy/partner of two older men, the book still manages to tackle some very serious subjects.

Gillibran Brown, called Gilli by his friends, is the hero of the book, as well as in his own mind. He's domestically partnered with two older men, both of whom he calls Daddy. The emphasis here is on the 'domestic' partnership, since Gilli is responsible for the upkeep of the home while his two daddies are off working. The book is written as part daily journal of Gilli's life, interspersed with slightly longer stories of specific events.

The writing style is very light, and while I don't have a lot of exposure to 20-something English lads, I'd say the author nailed the language and attitudes quite accurately. While the subtitle of the book may be "The Memoirs Of A Submissive Houseboy", Gilli is a submissive only when it comes to sex - and even then it seems he can be rather demanding. The rest of the time he's a headstrong and temperamental young man, and that's usually what gets him in trouble. At times he has the emotional maturity of a two-year old. He gets jealous of the time his two daddies spend with each other, or with friends he doesn't like. He is bullheaded about doing what his daddies tell him to do, even (perhaps especially) when it's for his own good.

When Gilli gets out of line, which is often, he gets spanked. There's a lot of spanking in this book, more than is to my taste, to be honest. But there were times when even I wanted to give Gilli a smack. He seems to go out of his way to piss off the alpha daddy Shane. While there is a lot of spanking, and allusions to a bit of bondage, I didn't classify this as a BDSM book since there's very little actual sex described. This is not erotica, although there's a lot of discussion of sex, it's left mostly to the imagination.

The nature of discipline and the role it plays in their relationship is one of the more serious topics tackled in the book. It's all done in the same light-hearted style of life-according-to-Gilli and isn't the least bit heavy-handed. Other serious topics addressed include the challenges of cross-generation relationships, the stigma of epilepsy and even the impermanence of life. The light writing style hooks you and reels you in while the author conveys some very useful lessons. I was very impressed by what the writer managed to pull off, and I'll be reading the sequels for sure.

(reviewed 32 days after purchase)
Kim Rickmon reviewed on April 13, 2010
(no rating)
I thought this book was funny and completely enthralling. A great weekend read.

"Fun with Dick and Shane" is a sometimes funny, sometimes sad, often sarcastic but always entertaining account of Gil´s life with his two dominant partners.