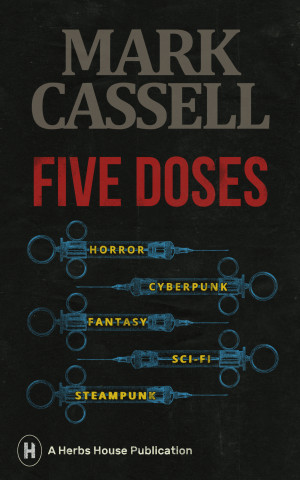 By Mark Cassell
The author of the best-selling Shadow Fabric mythos administers some lethal doses of fiction across five genres. More
In the fantasy story ALONE WITH THE BONES, a thief is freed when mysterious and gigantic bones rise from the earth. The tale of IN LOVING MEMORY, with its subtle sci-fi undertones, reveals a childhood mischief that unknowingly ends in adulthood. The cyberpunk episode ALPHA BETA GAMMA KILL is taken from the popular Chaos Halo series giving us a dystopian future where food is in short supply. With THE REBIRTH we are shown Cassell's unquestionable passion for supernatural horror, in which a school teacher is gifted a peculiar Easter egg. Finally there's the flash fiction steampunk piece VANISHED, about the short-lived maiden voyage of an airship.

"A wicked journey of the imagination. A Mustread." - Five-star reviewer.

Interview with the author:

How would you classify your work?

MC: "Dark fantasy and horror, certainly. And of course, the darker side of science fiction and fantasy. Whether it’s alien horror or supernatural horror, it does it for me. Not mankind's horror, you know? Not real gore and graphic violence, I don't really go down that route ... I'm talking about the horror that exists on the other side of what we can see, what we can touch. Something beyond our senses."

Mark Cassell lives on the south coast of England with his wife and a number of animals. He often dreams of dystopian futures, peculiar creatures, and flitting shadows. His jobs have included a baker, a laboratory technician, and a driving instructor, and 2018 sees him acting in the horror movie Monster directed by Matt Shaw.

As a familiar face on the UK convention scene, Mark sells his books as well as his photographic art, and doesn’t charge for selfies. The busy man that he is, he also hosts writing retreats for Writers’ HQ.

Primarily a horror author, his steampunk, dark fantasy, and sci-fi stories have featured in numerous reputable anthologies and zines. His best-selling debut novel The Shadow Fabric is closely followed by the popular short story collection Sinister Stitches and are both only a fraction of an expanding mythos of demons, devices, and deceit. The novella Hell Cat of the Holt further explores the Shadow Fabric mythos with ghosts and black cat legends.

The dystopian cyberpunk collection Chaos Halo 1.0: Alpha Beta Gamma Kill is in association with Future Chronicles Photography where he works closely with their models and cosplayers. He’s often alongside these guys at conventions all around the UK, and one of their shoots inspired the creation of his new Lovecraftian steampunk horror universe that begins with the novelette In the Company of False Gods.

Review
James Jenkins reviewed on June 6, 2020
(no rating)
I read parts of a couple of stories, to many broken bodies for my taste.

You have subscribed to alerts for Mark Cassell.

You have been added to Mark Cassell's favorite list.

You can also sign-up to receive email notifications whenever Mark Cassell releases a new book.