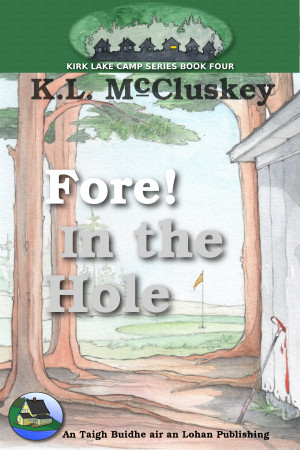 Fore! In the Hole

By K.L. McCluskey
The season started well. The women from a women's shelter had a chance to unwind a little and let mother nature help soothe their worries. It didn't end well. Her angst over the man she left behind on the east coast mixed with her resentment of the man she once loved, caused Charlene as much stress and worry as the body discovered on her property just a week before the hectic May long weekend. More
A Charlene Parker mystery.

After spending a peaceful and relaxed winter at her home in Nova Scotia Charlene is back in Ontario to open the cottage resort for another noisy and hectic season. Sneaky Bob gets lucky, Sarah is bonkers, the geology students are back and a group of women from an area shelter are there to relax. Charlene’s relaxing time is definitely over.

Set mostly in northern Ontario at a cottage resort and partly in rural Nova Scotia at her old fixer-upper house, Fore! In the Hole (book four in the Kirk Lake Camp series of books) features a former Hamilton police detective, Charlene, who would like most of all to spend the season just doing the never ending everyday chores of running a resort, but who seems to end up having to solve murders instead.

It's enough to make Charlene want to head south back to a dark alley in the north end of Hamilton to chase a criminal in a hoodie (always a hoodie), with a gun, who is too scary, too mean, too drunk, too stoned, too hilarious, too stupid and too close.

Thank goodness she has time to unwind every now and then with a good Cape Breton single malt whisky.

The season started well. The group of women from a women's shelter had a chance to unwind a little and let mother nature help soothe their worries. It didn't end well. Her angst over the man she left behind on the east coast mixed with her resentment of the man she once loved who lived just a short drive away, caused Charlene as much stress and worry as the dead body discovered on her property just a week before the hectic May long week-end.

Ms. McCluskey is a Canadian author of cozy murder mysteries and short stories. Her current cozy mystery series, Kirk Lake Camp, takes place primarily in Ontario but with an ever stronger connection to Nova Scotia as the series progresses. The author has first hand experience similar to that of the main character of the Kirk Lake Camp and Back Road to Shore cozy mystery series. Her book of short stories is life on the Eastern Shore of Nova Scotia as seen through the eyes of a CFA, Come From Away, after having moved from northern Ontario to the Eastern Shore.
She joined the Hamilton Regional Police Service in Hamilton, Ontario and was a police officer for 14 years. She started as a beat officer in Stoney Creek, then became a Detective Constable in the Criminal Investigative Division, partnered with a Sergeant, investigating crimes such as serious assaults, robberies, sudden deaths, sexual assaults and break and enters. She was promoted to Sergeant and worked in the Special Investigative Unit as a detective in the Sexual Assault Unit. She was also specially trained in Child Abuse investigations and Domestic Violence.
She passed her Staff Sergeant exams and attained the rank of Acting Staff Sergeant before she left policing and moved on to another career in which she owned a water access resort in northern Ontario that included 12 rental cottages, fishing boat and canoe rentals, and a small general store.
After seven years she sold the resort and taught Police Foundations at a small college in Sudbury, Ontario, before she moved to Victoria, B.C.
She moved back to northern Ontario and concentrated on her work as a freelance writer going back to what she missed most, writing.
Well before her policing career, she graduated from Print Journalism. She has been writing for over 40 years including her time as a police officer and resort owner. Her articles included a weekly fitness column, feature stories, and a short stint as a beat reporter for criminal court and town council.
She now lives with her partner in an old farmhouse in a small community along the eastern shore of Nova Scotia, not far from Cape Breton Island.

She enjoys traveling to visit her daughters and grand-children. While at home she kayaks, hikes, cycles, swims, practises yoga, and drives the back roads to explore the beauty of her new province where she gets inspiration for her writing and life in general.

K.L. McCluskey is currently working on the Kirk Lake Camp murder/mystery series of books. The series will consist of six books in total and when completed will lead to the Back Road to Shore series. The books are available as ebooks and are published by An Taigh Buidhe air an Lohan (The Yellow House on the Pond in Scottish Gaelic) Publishing, a small Nova Scotia publisher, and distributed by Smashwords.

About the Series: Kirk Lake Camp

Owning and operating a cottage resort in a peaceful northern Ontario setting should be a piece of cake for a former police detective. Families should be happy to be on a vacation in rustic log cabins set among acres of old-growth pines along a vast shoreline of a clean lake ideal for swimming, boating and fishing.

It should and they should, is what goes through the mind of a former detective turned resort owner every time a guest shows up and havoc reigns.

It's enough to make the former detective turned resort owner want to head south back to a dark alley in the north end Hamilton to chase a criminal in a hoodie, always a hoodie.

But instead, the former detective turned resort owner stays put and cleans toilets, cuts wood, sells gas, worms and ice, rents fishing boats and canoes and cottages, smiles at guests, and helps the local O.P.P. solve murder in the north on the resort, because every time guests show up, someone gets killed.

You have subscribed to alerts for K.L. McCluskey.

You have been added to K.L. McCluskey's favorite list.

You can also sign-up to receive email notifications whenever K.L. McCluskey releases a new book.