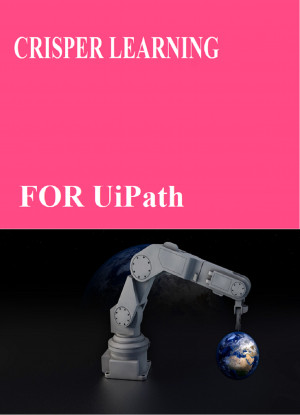 By Vaibhav Jain
Software Robots or Robotics Process Automation is the process of imitating the job a normal person would do in front of a computer system. It is the first step to building the Artificially Intelligent operations, which would be nothing but programmed bots accompanied with cognitive abilities. In this book, we’ll be dealing with UiPath, one of the most sophisticated tools available today. More
The book provides a to-the-point yet comprehensive knowledge to build software robots using UiPath, the most sophisticated Robotics Process Automation tool available in market today. RPA is the process of imitating the rule-driven, everyday IT admin tasks and automating them through software bots which are effectively scheduled, executed and managed via dedicated private server. It is built on top of .NET computer programming framework and inherits all its capabilities within it. The tool provides a mechanism to interact with any external standalone application such as MS Excel, MS Word, Notepad, PDF files, e-mail servers, web-applications etc. or full-fledged enterprise applications such as Oracle or SAP business suites. It’s easy to learn, implement as well as manage the bot and provides a higher efficiency for tedious, non-productive tasks such as Data entries, event logging, report creations, system checks, data administration and more similar tasks. Robots act as a much faster, efficient, error-free and reliable workforce which can theoretically work 24x7 with no downtimes needed.
To discuss the functioning and capabilities of UiPath RPA, this book is legibly divided into 14 chapters:

Along with the detailed theoretical explanations of each topic, exercises and sample use cases (solved / unsolved) have been provided to make the learning experience more effective.
It is the dire need of corporates today to make the most out of limited time in a day. Being focused on the productive tasks and delegating the non-productive yet essential tasks to a robot is both logical as well as in today’s world, feasible. History has always shown the competitive edge and leadership one gains in the market, if the potential for a technology is realized before its showtime. It’s better to be a part of the robotics domain to lead the rat race way before it becomes the norm.

Vaibhav Jain is a certified RPA Developer who has led several RPA projects. Currently he is working as Senior Technology Advisor at Ernst & Young LLP, based out of Los Angeles, CA. He has also been a Software Developer at Thomson Reuters in New York City.

After being in consulting business for 3 years, he realized that a lot of tasks, even with such technological advancements, are still pursued to be done manually. That’s when he figured out RPA technology and delved deeper into it. With RPA, it became clear that any rule-driven non-productive tasks can be automated and accomplished with exponentially higher efficiency. He has facilitated trainings in his firm and outside and currently mentors all budding RPA developers to pursue a career in this domain. He’s proficient in UiPath, BluePrism and Automation Anywhere RPA tools. Do check out his website to learn more about him and RPA tips and tricks.

After finishing high-school from New Delhi - India, he went to Amity School of Engineering and Technology to pursue his undergrad in Computer Science & Engineering. During that time, he went to several workshops and IT conferences to quench his thirst for new technologies. He got hands-on experience in Java EE and AngularJS, Cybersecurity domains and protocols, System Integration techniques and Data Analysis using Tableau.

Right after his undergrad, he went to Syracuse University to pursue his Masters in Information Management. He developed industrial connections and got introduced to RPA for the first time. An interview at Ernst & Young LLP through college career services landed him an amazing offer and the once-in-a-lifetime opportunity to get actively involved in RPA community.

He intends to provide everyone with a functioning knowledge of IT tools, the capabilities it holds, the value add for learning new things and the fundamentals that can be leveraged to any programming language / life whatsoever.

You have subscribed to alerts for Vaibhav Jain.

You have been added to Vaibhav Jain's favorite list.

You can also sign-up to receive email notifications whenever Vaibhav Jain releases a new book.