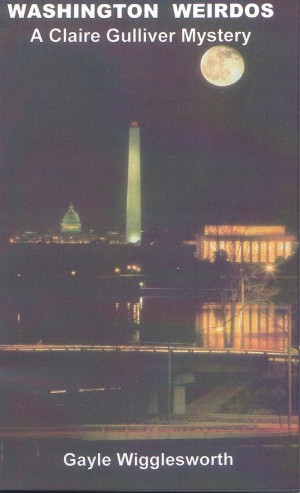 By Gayle Wigglesworth
A Claire Gulliver Mystery,Claire received a warm invitation from David Lickman, president of Vantage Airlines, to visit he, and his wife, in Washington D.C. It was too good to decline, so she didn’t. She had only been in town a few hours when a man tried to knife her on the Mall. Her natural inclination was to leave for home immediately, but she wasn’t certain that would keep her More
A Claire Gulliver Mystery

Claire, owner of Gulliver’s Travels Book Store, is now back in the safety of her own world and the minutiae of the day to day requirements of her business. Claire has put all of excitement and danger of her first experience of international travel out of her mind. Until the day the letter came from David Lickman, the President and CEO of Vantage Airlines. His warm and cordial invitation was too good to refuse so she didn’t.

But Claire had learned her lessons in life. So after a scary knife attack made on her was thwarted without injury that first night on the Washington Mall, she made the most sensible decision possible. She was out of there!

After she had her meeting with the Vantage executives the next morning, she planned to head toward the airport and the safety of her bookshop. But it didn’t work that way. As David Lickman pointed out, going home and hiding wouldn’t make her safer if that attack on her was of a personal nature instead of a random incident. They needed to know what had happened before they took any action to avert further danger. Claire was appalled to realize they were right. Her flight to the familiar was as likely to be more dangerous for her than it was to propel her into safety. Therefore, she agreed to wait while the authorities tried to sort it all out.

Washington Weirdos is a warm, compelling, edge-of-the-seat drama played out against the background of our nation’s capital. Join Claire at the Lickman’s estate in Maryland for the festive Labor Weekend Gala. Meet the Lickman’s granddaughters, Jo-Jo and Amy, Tuffy their adorable dog, and the loyal household staff as well as the key players at Vantage Airlines while the days pass and the mystery deepens. Something is not right. Something is going on. But the “what” and the “why” of the mystery is still to be determined.
Available ebook formats: epub mobi pdf rtf lrf pdb txt html
First 20% Sample: epub mobi (Kindle) lrf more Online Reader
pdb
Price: $5.99 USD
Buy Add to Library Give as a Gift
How gifting works
Create Widget
Tags: amateur sleuth clean language no graphic sex travel england travel wales travel tour
About Gayle Wigglesworth

Gayle has always been torn between her skills at organization and management and the creative arts. As a young woman she moved to San Francisco on what she considered her life’s adventure. And while she took a job in the banking community to support herself, she really wanted to write mystery novels. Unfortunately, while living alone in a “big” city and typing her novel in the late hours of the night, she frightened herself with her plot line and had to pack it away. In fact, she no longer would even read her beloved mysteries; it was way too scary. So instead of writing she concentrated all her energies on her career, eventually rising to the level of a Senior Vice President.

She continued to pursue her creative side by continuing art courses and she became an accomplished potter producing unique pottery, both on the wheel and by hand. Eventually, the children grown and living on their own, Gayle returned to her mysteries and to her writing.

Gayle lived her whole life in California so when her company was sold and she found herself in the latter years looking for a job it was a shock to realize she may have to relocate. She accepted a position in Houston, but her husband assured her they would regard it as a “foreign assignment” and they could move back to the San Francisco Bay Area when she was ready to retire. Little did they know that they would love Houston Texas where they now live. However, with all their family and friends back it California it was difficult to continue the traditional family get-togethers they habitually hosted. Her children whined, “Who’s gonna cook?” and called at all times of the day and night for recipes and instructions, which inspired Gayle to write “the book.”

Gayle’s Legacy, Recipes, Hints and Stories Culled from a Lifelong Relationship with Food makes it possible for the traditions to continue, albeit, with other people now hosting the meals. This cookbook is more than a collection of recipes, it’s a “how to” book. This book, including detailed steps for creating the family’s favorite recipes while entertainingly telling family history through the vignettes and photographs, was published in 2003.

When the company Gayle worked with in Texas was sold, she decided there was a message to her in that. Instead of taking another position she elected to retire early and concentrate on her writing. She was determined to write and publish a mystery.

Because Gayle and her husband love to travel and have done so extensively, she followed the advice of the experts, “write what you know.” Gayle developed a concept for a mystery series where the protagonist, Claire Gulliver, a librarian-turned-travel-bookshop-owner is a nice person who, somehow while traveling, becomes embroiled in situations that are not nice; in fact, sometimes these situations are downright terrifying.

Currently five Claire Gulliver Mysteries have been published. Gayle is currently finishing the sixth which is due out at the end of 2010. Meanwhile she finished a stand a long mystery, Mud to Ashes, which was published in 2009. She is working on another series, called Glenda at Large.

Gayle spends her time writing, potting, reading, traveling and cooking. You can see her at many of the mystery book conferences promoting her mysteries, occasionally she will conduct a cooking class to promote her cookbook, conduct a workshop to help people learn to write their own family history/cookbook and once in a while she will do some contract consulting in the banking world. She is a member of Sisters in Crime and Mystery Writers of America.

You have subscribed to Smashwords Alerts new release notifications for Gayle Wigglesworth.

You have been added to Gayle Wigglesworth's favorite list.

You can also sign-up to receive email notifications whenever Gayle Wigglesworth releases a new book.