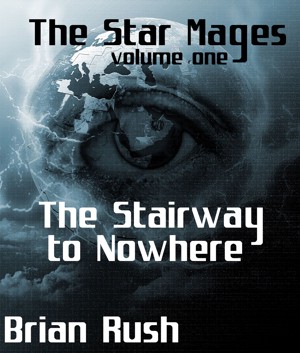 The Stairway To Nowhere

By Brian Rush
Rated 4.71/5 based on 7 reviews
A fantasy story set in the modern world. Two secret orders of powerful magicians locked in bitter rivalry. Two ex-lovers. She's in one order. He's in the other. As the former leaders of the two orders join forces to destroy them both, Karla and Correl must work together to stop them, and find their feelings for each other, still strong, complicate everything. 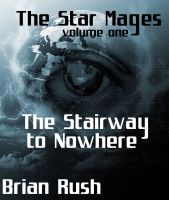 Also in Series: The Star Mages 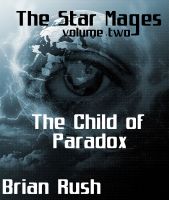 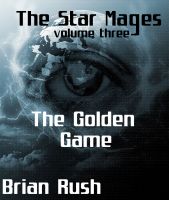 I really enjoyed this story. Worth the time to read!

This series is brilliant! The Stairway to Nowhere draws you in immediately with clever dialogue, a fast-paced & entertaining plot, fascinating characters, & epic battles between Good & Evil, Love & Power. The Talismans & the Background realm incorporate themes similar to Zelazny's classic magnum opus the Amber series (a must read for any fan of fantasy, compiled in one volume The Great Book of Amber), but do so in a way that is fresh, original, & modern, set in the foreseeable future. The characters are complex & believable; magic, swordfights, & sorcerous duels abound, & yes, there is enough sex to make it fun & interesting for adult readers without derailing the plot & still be appropriate for most teens. I have already read The Stairway to Nowhere & The Child of Paradox twice each, & can't wait to read the next in the series, The Golden Game. Brian Rush deserves recognition for his great writing - Please keep it up! Thanks for the great reads!

There are wizards about in the world -- mighty wizards with amazing powers. You wouldn't notice them, though. The mystical talismans that supply their power, the Star and the Crystal, both insist on absolute secrecy, and won't let them do blatant public magic. Still, in private, or off in the astral plane, they're quite impressive. They're also rivals and almost enemies: the Star being sorta-kinda Good or at least Lawful, the Crystal sorta-kinda Evil or Chaotic. They've got a truce, though.

Correl and Karla were lovers and lived together for a while, but they fought all the time. After they broke up, Correl was recruited by the Star Mages, and Karla by the Crystal.

Then Karla stumbled on something peculiar in the astral plane: an immense stairway, marked with a symbol that points it towards worlds where humans never evolved. Strange enough so that she called up Correl and asked him to help investigate it ... and they uncovered a plot that upsets the balance of power of the mages of Earth.

The Big Flaw: It's kind of repetitive and talky. Correl and Karla spend a lot of time hasing over relationship matters, with each other and with various advisors. Which is all fine and reasonable, but the relationship changes only slowly, and the book winds up treading over approximately the same ground repeatedly.

I was quite amused by the tie-ins with real-world magical traditions
The magic, at its best, was spiffy and flavorful. I particularly liked the bit where Karla went into the Akashic Library, where all knowledge past and future is stored, and ... checked out a book about the war she was about to engage in. She got some really useful information from it about things that had already happened --- but the future sections, which might occur several ways, are unreadable.
The magical systems and structures gave me good flashbacks to Zelazny's Amber.

My rating is 3 magic talismans out of five. (I'd rate it "3 stars", but in a book with a Star, a Crystal, and a Surprise, I better not use that system.) Good mind candy or airplane reading or what have you, and worth your time.

(review of free book)
The Writers of the Apocalypse reviewed on July 27, 2010

This was one of the more interesting books I've had the joy of touching upon. More!

This is a love story, and one that made me cry, so it gets my highest recommendation. The story is also an ingenious metaphor for our times and the human psyche as it evolves. There's psychology, alchemy, and spirituality, and it moves fast, too...toward the goal of "utopia" in the sequel(s). Is fighting a plausible route to utopia? Hm. I don't know, but there was enough love and compassion in this first encounter to make me want to read more.

Estranged lovers, now both powerful mages in two opposing orders, find themselves forced to work together, fight and kill former allies, and try to save humanity when they discover... The Stairway To Nowhere.

Brian Rush has charted out an entirely new future-fantasy universe, and in this inaugural outing, you'll experience traveling the world in the blink of an eye, visiting astral planes, and feeling the hot breath of myriad mythical monsters on your neck. I found this book a very compelling read, and I can hardly wait until the promised sequel arrives!

If you liked Avatar (or Harry Potter for that matter), you'll like this book.

A very fun story, and one with many surprises. I was totally drawn in by the end of the first chapter, and I could not put the book down until I finished it. The author tells a good story of once-passionate lovers who meet again and find themselves on opposite sides of an emerging conflict - a conflict that could change the future of mankind. I especially liked how he would switch perspectives from chapter-to-chapter, first telling the story from his perspective, and then later advancing the storyline from hers; each chapter fleshing out their personalities more and more until you really get a sense of each person.