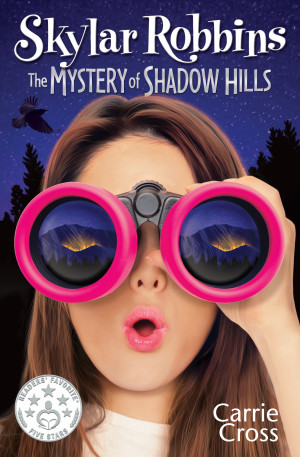 By Carrie Cross
Magic. Mystery. Danger. 13-year-old sleuth Skylar Robbins was in for a summer she never could have imagined. Stuck at her bullying cousin’s creepy Malibu estate, Skylar has to attend a new middle school where she doesn’t have any friends. Then an unusual classmate introduces her to the fascinating world of witchcraft. Practical Skylar didn't believe in magic. Until their spells begin to work. More
Thirteen-year-old sleuth Skylar Robbins plans to become a private detective like her grandfather. Stuck at her bullying cousin Gwendolyn’s Malibu estate for the summer, Skylar brings her fingerprinting kit, portable spy tools, and her journal for taking notes in secret code. She had no idea how dangerous the next eight weeks would prove to be.

As soon as Skylar gets to Malibu, mysterious things begin to happen. She discovers a hidden garden behind a rusted gate in Gwendolyn’s huge back yard. Her new friend Kat, who claims to be a witch, recognizes magical elements throughout the garden and declares it the perfect place to perform spells.

“We are going to grow gems.”
“Grow what?” There was no way I heard her right.
Kat’s eyes gleamed. “Gems. You know, rubies, emeralds, sapphires? Gems!”

Ignoring the rising tide, they sneak down to the beach at midnight and search three caves for magic seeds to plant in the abandoned garden. Practical Skylar didn’t believe in magic. Until their spells begin to work.

Carrie Cross is an avid reader who fell in love with books as a little girl after listening to Goodnight Moon at bedtime. Carrie discovered her passion for mysteries while reading Nancy Drew and The Happy Hollisters series--and then Judy Blume arrived with her unputdownable coming-of-age novels like Are You There, God? It's Me, Margaret and Deenie.

A dancer since age six, Cross took three years of ballet and nine years of jazz dance, until a horrific car accident at age 18 put her in the hospital for five weeks with a broken neck, a broken hip, and severe head trauma resulting in coma. After a year of rehabilitation, Cross returned to C.S.U.N., earning a degree in Speech Communication. During college, Cross pursued a modeling career and was a note-taker and sign language interpreter for the hearing-impaired.

During an interview she was asked, "Where do you get your inspiration?"
"When I was six years old, my parents decided we needed to buy a bigger house. We looked at a creepy two-story in Santa Monica Canyon, and I played hide-and-seek with the little girl who lived there. There were closets and secret hiding places with doors that opened into other rooms. Later, I wondered, "What if there was a clue hidden in one of those closets?" And the idea for the Skylar Robbins mystery series was born.

Cross's influences include YA authors Deb Caletti, Kara Thomas, and Sarah Dessen, as well as Robert Crais and Lee Child. She lives in Southern California with her graphic designer husband Ed-- creator of the Skylar Robbins book covers--and their affectionate rescue cats, Tiki and Kona.

Skylar Robbins mysteries have won multiple awards, and several have achieved #1 Bestseller status in Children's Detective Books on Amazon. Other accolades include being voted Book-of-the-Month by LASR readers, three 5-star Reader's Favorite awards, the 5-Star Literary Titan Book Award, and one was a Top Ten Finalist for an Author Academy Award in the YA/Middle Grade category. Many reviewers have compared Skylar Robbins to a modern Nancy Drew.

Skylar's adventures begin with THE MYSTERY OF SHADOW HILLS, and continue in THE MYSTERY OF THE HIDDEN JEWELS. For those who wonder what became of the magic garden and Skylar's bullying cousin Gwendolyn, Cross penned a 92-page fantasy novella, GWENDOLYN'S REVENGE. After she solves her second big case, the Skylar Robbins Detective Agency tackles the MYSTERY OF THE MISSING HEIRESS, and then Skylar travels past the Hawaiian archipelago to solve the MYSTERY OF THE ISLAND IDOL.

About the Series: Skylar Robbins Mysteries

Reviews of Skylar Robbins: The Mystery of Shadow Hills by Carrie Cross

You have subscribed to Smashwords Alerts new release notifications for Carrie Cross.

You have been added to Carrie Cross's favorite list.

You can also sign-up to receive email notifications whenever Carrie Cross releases a new book.