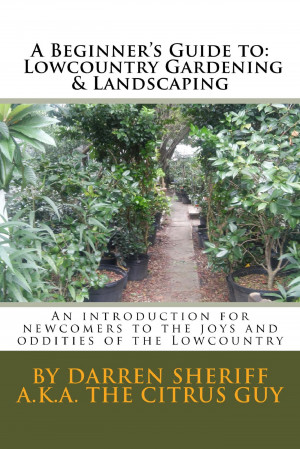 A Beginner's Guide to Lowcountry Gardening and Landscaping

Darren Sheriff is originally from New Jersey, which he kindly asks, not to hold against him. He has been interested in plants of all kinds since childhood, even helping his mother with her garden and having his own at the age of 5.
He not only works as the manager at Terra Bella Garden Center, he is a Certified Professional Nurseryman in the state of South Carolina, a Charleston County Master Gardener, founder and current president of the Lowcountry Fruit Growers
Society and started the Lowcountry Power Brass band as their leader, Bass Trombone and Tuba player.
Affectionately known as The Citrus Guy because of his 60+ Citrus trees he grows, he actually has more than 3 times that many Camellias, topping the 200+ mark and is the President, & show chairman of the Coastal Carolina Camellia Society. Add to that he is the American Camellia Society South Carolina State Director.
Darren’s wife, Tammy, is originally from the Charleston area and they have been married since January, 1992. They have three furry children, 1 cat named Taz and two Chihuahuas named Daisy and Daphne.
Tammy helps Darren enter as many shows as possible throughout the Southeast, winning many awards in his short time in the Camellia world. Darren is a certified Camellia Judge and has been President of the Coastal Carolina Camellia
Society since June of 2015.

You have subscribed to alerts for Darren Sheriff.

You have been added to Darren Sheriff's favorite list.

You can also sign-up to receive email notifications whenever Darren Sheriff releases a new book.