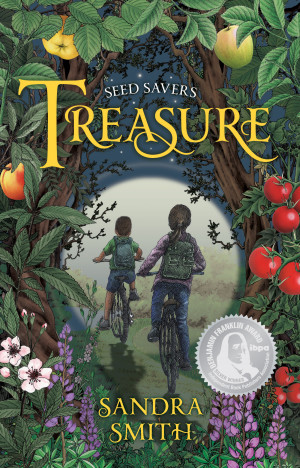 By Sandra Smith
Rated 5.00/5 based on 1 review
Clare, Dante, and Lily live in a future where growing your own food is against the law. New friends instruct the children in the old ways of gardening, urging them to change the future. Can the children learn enough before being stopped by GRIM, the government agency controlling the nation's food supply? And can children really change the world? More
Two kids, two bikes, and an idea they can change their world.

It's 2077. There's no apocalypse, but some things are different. Things like the weather, the internet, and food. In twelve-year-old Clare's world, blueberry is just a flavor and apples are found only in fairy tales.

Then one day Clare meets a woman who teaches her about seeds and real food. Ana tempts Clare with the notion that food exists other than the square packaged food she has always known. With Ana's guidance, Clare and her friends learn about seeds and gardening despite suspicions that such actions are illegal.

When the authorities discover the children's forbidden tomato plant and arrest their mother, Clare and her brother flee. Clare has heard of a place called "The Garden State," and with their bikes, a little money, and backpacks, the children begin a lonely cross-country journey that tests them both physically and spiritually. Will they succeed in their quest to find a place of food freedom? And can they, only children, help change the world?

Treasure is a gentle dystopian, frightening only in the possibility that we may not be far from the future it paints. First in a five book series.
Available ebook formats: epub
Price: $5.99 USD
Buy Add to Library Give as a Gift
How gifting works
Create Widget
Tags: journey dystopian sustainability and environment diverse cast middle grade series futurisitic family books garden fiction religious characters
About Sandra Smith

Sandra Smith grew up on a farm with a tremendously large garden. She maintains that if you can't taste the soil on a carrot, it's not fresh enough. Although she now lives with her husband and two elderly cats in the city, she still manages to grow fruit and vegetables on their lot, as well as tend to a couple of egg-laying and friendly hens.

Smith has been writing since she could hold a pencil, although the lettering she left on her grandmother's books sometimes contained a reverse capital R. In high school, she won awards for her poetry and short stories, and later was an editor on her college newspaper. Upon graduating with a degree in Communication Arts, Smith accepted a job at a small newspaper in eastern Oregon. She later declined the offer, choosing instead to teach English in China. Though she had an idea for a novel or memoir back then, the only writing produced were the many letters home detailing her exploits to friends and relatives.

After China, Smith spent many years teaching in private and public schools, filling hoards of notebooks with her writing--though mostly lesson plans. Along the way, she has written essays, newspaper articles, children's books, and poetry, very little of which she bothered to publish.

Smith is the author of the Seed Savers series, a middle grade/YA series set in a future where gardening is illegal and real food unknown. She gardens and writes at her home in the beautiful and green Pacific Northwest.

I loved this book! Don't be put off if you find it described as "dystopian". I mean, it is - the government has banned growing your own food and is arresting anybody found doing it - but it's not horrific or violent like you'd usually get wtih dystopian fiction. I loved that the Bible was used as a basis for teaching the children about seeds and growing food, and my heart was in my mouth during their adventure after they fled their home. It'd be a great book for children... and as I said above, I loved it. I just bought the next three books in the series on the strength of this one, so that ought to tell you something.

You have subscribed to Smashwords Alerts new release notifications for Sandra Smith.

You have been added to Sandra Smith's favorite list.

You can also sign-up to receive email notifications whenever Sandra Smith releases a new book.