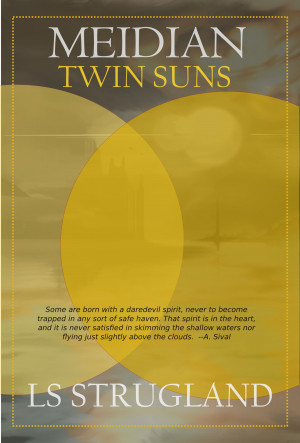 By L.S. Strugland
The story begins in a far planetary system known as Meidian. The protagonist is cron-Azoron, a fighter reborn and reassembled and later the center of controversy over his actions before and after the tragic crash of a guest transport.

A light romantic sci-fi adventure with lots and characters, angst, and chaos. More
This story, Meidian: Twin Suns will become not really a novel series but a journal series from the perspective of an observer brought in from a far away, dead world, and instantly grew intrigued by the spectacular linked system of terrestrial bodies, and ways of existing among its inhabitants.

I don't really call myself an author, not really even a writer, since it takes more than stringing words together to form a sentence in order to win over the title of writer and author from an audience.

I'm just someone who enjoys daydreaming and storytelling. After all, my life experience consists of moving from one place to the next without much close family and few friends. In fact, I will admit being poor at establishing and maintaining relationships with other people, which is the main reason I have spent lots of time living in my own little world of ideas since childhood, being sickly and without much to fill in for the emptiness I felt in my heart and my soul.

Unfortunately, I probably don't have to but should add that I am not very knowledgeable one about science, the world, galaxies, or the universe. Yet, I have always been extremely interested in anything science-fiction and adventure. I'm hardly a romantic and don't really read or follow romantic fiction at all. However, I could not think of myself as writing a story about people without a romantic backstory.

Anyhow, after a long, long time of trying to get this story sorted out, it is now set up in more of a journal form, each section covering significant events by day.

Thank you for reading. Hope you will find enjoyment, or at least some sort of amusement in my work.

As a conflicted, often disoriented, at times considered a faux-creative soul, I live each day looking forward to at least being able to enjoy this never-ending hobby. I do not feel bad at all about not getting things just right. What does worry me though is working on what has been forever on the Meidian series, and putting myself out there as an ongoing crash test on what not to do as a writer.
-- Cheers.

You have subscribed to alerts for L.S. Strugland.

You have been added to L.S. Strugland's favorite list.

You can also sign-up to receive email notifications whenever L.S. Strugland releases a new book.