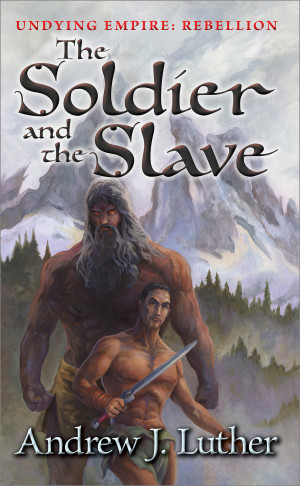 The Soldier and the Slave

By Andrew J. Luther
Legion officer Kied Leele was convicted and imprisoned in a slave mine for refusing orders he knew to be wrong. Meanwhile, a special team searches for a long-forgotten object of power desired by the Emperor himself. Kied’s mysterious new cellmate seems to know a great deal about this hidden object. Together, they might just stop the slaughter of innocent civilians and deny the Emperor his prize. More
Book 1 in the Undying Empire: Rebellion series

From the Undying Empire comes a new trilogy of swords, sorcery, revolution, and sacrifice.

Unable to follow orders that he knew to be wrong, Kied was convicted and imprisoned in a slave mine for betraying his commission as an officer in the Imperial Legion. With the executions of his subordinates who followed him weighing heavily on his soul, Kied expects the remainder of his life to be full of darkness, toil, and suffering.

The Legion—occupying the mountains in the north of the Empire—has rounded up all local civilians while a special team searches for a long-forgotten, buried object of power desired by the Emperor himself. But Kied’s new cellmate, a dangerous giant of a man, seems to know a great deal about this hidden object.

Kied believes that together, they might just be able to stop the slaughter of innocent civilians and deny the Emperor his prize. However, a long journey lies ahead of them, if they can escape the prison.

And Kied doesn’t know if he can trust his companion, a man whose terrible secrets may herald the return of ancient beings long thought dead.

The Soldier and the Slave is the first novel in the Undying Empire: Rebellion trilogy.

Andrew J. Luther lives in Burlington, Ontario with his wife and son. He currently works as a communications professional for a large, multi-national corporation.

About the Series: Undying Empire: Rebellion

The Undying Emperor has gone too far. Now, the very Legion that serves as an extension of his will has become the breeding ground for treachery. Can a small group of elite soldiers throw down the most powerful ruler in the world?

You have subscribed to alerts for Andrew J. Luther.

You have been added to Andrew J. Luther's favorite list.

You can also sign-up to receive email notifications whenever Andrew J. Luther releases a new book.