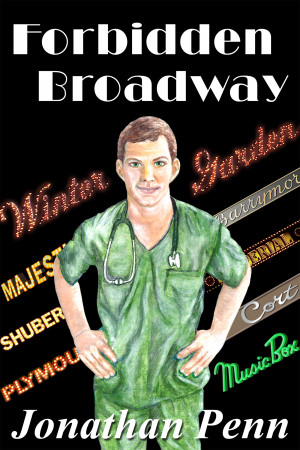 Charlie Perkins sings and dances, but he gave up his childhood dream to become a nurse. When Nate Sonntag contracts Charlie’s agency to care for his elderly grandfather, Charlie doesn’t know what to expect, but he’s perplexed when Nate tells him that under no circumstance is he to mention the theater in his grandfather’s presence. The subject of Broadway is strictly forbidden! More
Charlie Perkins grew up in the middle of nowhere. His mom, the local Drama teacher, instilled in him a lifelong love of musical theater. He sings and dances, but he gave up his childhood dreams of performing professionally and got his nursing degree before moving to New York City to work in home health care.

Nate Sonntag is a serious businessman. He gives his all to the success of the import/export company he inherited from his father. Working all those extra hours is also a convenient way to avoid dealing with the emotional fallout of the traumatic events that placed everything in his hands.

When Nate contracts Charlie’s agency to care for his elderly grandfather, he ends up getting far more than he expected. Charlie doesn’t know what to expect, but he’s perplexed when Nate tells him that under no circumstance is he to mention anything about the theater in his grandfather’s presence. The subject of Broadway is strictly forbidden!

This is not Tolstoy; but it is a masterfully drafted story of a young man with stars in his eyes and a heart full of love, who becomes the inadvertent saviour of a badly broken and unhappy family.
—Ulysses Dietz, Prism Book Alliance

This is, at heart, a comfort/healing story, a feel-good story. With naughty bits! Includes: a wild ride on a motorcycle, one VERY particular dog, a meddlesome dance teacher, a nosy roommate, and a truly sparkling Happily Ever After!
—Dani(ela), Goodreads reader

I loved this romance! Charlie was so peppy, and all the secondary characters were fun too. The setting was great (I recently saw two plays on Broadway). Everything about this story was fun!
—Kevin E. Davis, Goodreads reader

Oh, I liked this story! The author has sprinkled great Broadway show tunes and musicals throughout as he tells the tale of Charlie and Nate. Their love story is low-angst, and they fit together like... well, like the perfect lyrics with the perfect melody.
—Crabbypatty, Gay Book Reviews
Available ebook formats: epub
Price: $2.99 USD
Buy Add to Library Give as a Gift
How gifting works
Create Widget
Tags: romance love musical mm theatre nurse broadway
About Jonathan Penn

Jonathan grew up in The South. While new to the world of writing, he has been inventing tales for at least fifty years. He was probably also making stuff up during the two years prior to that but, as this was his pre-verbal period, there's no evidence one way or the other. An armchair linguist, he has taught himself to ask, "Where is the bathroom?" in seven languages. He gardens, and enjoys red wines, theatre, cooking, singing and, of course, writing. Jonathan reminds himself every day how fortunate he is to have shared the best and worst of the last thirty-three years with the man of his dreams. He loves hearing from readers, so please add reviews at Amazon and Goodreads, and feel free to email him and friend him on Goodreads and Facebook.

You have subscribed to alerts for Jonathan Penn.

You have been added to Jonathan Penn's favorite list.

You can also sign-up to receive email notifications whenever Jonathan Penn releases a new book.