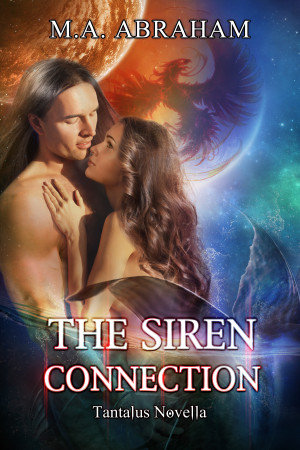 By M.A. Abraham
The oceans of Tantalus are teaming with Aquarians, dangerous and predatory mammals. Kyllan as a winged man cannot travel the waters and turns to his friends the Sirens. Kyllan and the Tantalarians will pay a price for their help. The Sirens see the waters of Tantalus and know where they want to live. The home they know on Mars has never called to them the same way. More
The oceans of Tantalus are teaming with Aquarians, the dangerous, predatory mammals that feed off anything that lands in their territory. What is strange is that they are avoiding part of the ocean closest to the shoreline where Trysuil is planning to build the city of learning. His question is, why this area? What is keeping them at bay? He is determined to find out and, to do this, he needs the help of their new allies.

As water is no place for a winged man, Kyllan turns to his friends, the Sirens. They will soon get to the bottom of this, but it will come at a cost to the Tantalarians. The Sirens take one look at all the water on Tantalus and know immediately this is where they want to live. The home they knew on Mars had never called to them in the same way and they know it is time to move on.

You have subscribed to alerts for M.A. Abraham.