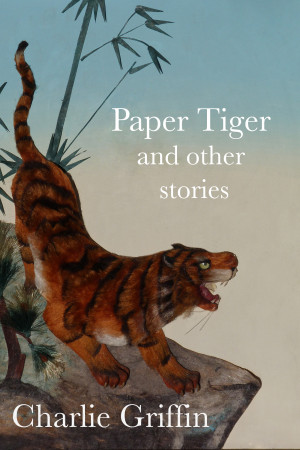 Paper Tiger and Other Stories

Charlie Griffin’s PAPER TIGER, AND OTHER STORIES, is a collection of flash fiction gems that explore critical moments in the lives of conflicted characters with a lot at stake. More
This small but mighty collection explores critical moments in the lives of conflicted characters with a lot at stake. PAPER TIGER, originally published in Flash Fiction Magazine reveals what can happen when a wheelchair-bound woman demands empathy on Bronx bus but has none to give; in THE CORIOLIS EFFECT, Brett Pribble contends with the arrival on his doorstep of a mysterious box with the sounds of wind and screaming inside; In BLOODLINES, John's family is teetering on the poverty line as his children go missing, in this modern take on the classic fairy tale, Hansel & Gretel; THE STORM ON THE SEA OF GALILEE, originally published in Scarlet Leaf Review, imagines a terrifying conversation between gangster Bobby Donati and crime boss Vincent “The Animal” Ferrara after the very real, highly publicized art theft at the elite Isabella Gardner Museum in Boston; and the collection concludes with DITCH, where Megan's hitchhiking road-trip with her best friend Ally goes awry when Megan finds herself alone and vulnerable, in this tale of revenge certain to provoke conversation in the wake of the #metoo movement.
Download: epub mobi (Kindle) pdf more Online Reader
lrf pdb txt
Price: Free! USD
Add to Library
Create Widget
Tags: fiction mystery true crime revenge mafia urban flash fiction fairy tale hurricane handicapped
About Charlie Griffin

Composer turned author Charlie Griffin is an aspiring sci-fi television writer. He is currently earning a BFA in Creative Writing for Entertainment from Full Sail University. With a background in improv, comedy and film acting, Griffin employs lessons learned in those fields in his writing. In 2017 he wrote, produced and starred in his own show for the Orlando Fringe Festival. His work has been published by Flash Fiction Magazine, The Scarlet Leaf Review, and ArtBorne Magazine. He is a writer and publisher member of ASCAP.

You have subscribed to alerts for Charlie Griffin.

You have been added to Charlie Griffin's favorite list.

You can also sign-up to receive email notifications whenever Charlie Griffin releases a new book.