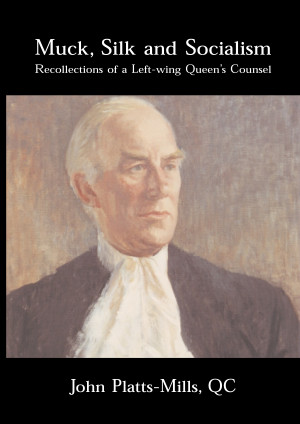 John Platts-Mills witnessed and participated in most of the changing events of the twentieth century. He holds an unusual position in English society – a genuine, empowered, political radical, who is also a Queen’s Counsel, Member of the Common Council of the City of London and internationally renowned jurist. John Platts-Mills’ clear voice and humane counsel have been heard, respected, and often ignored, by distinguished world political leaders and the most celebrated British jurists and criminals of the last fifty years.
The man who encountered Hitler on a walking holiday in Austria, and later attended Stalin’s funeral, was endowed with an innate and remarkable social grace that enabled him to move freely through the entire range of society. He spoke with the same egalitarian clarity to Nancy Astor, Winston Churchill, Ronnie Kray and Arthur Scargill, as to the unnamed Asian woman-striker on the picket lines at Grunwick.
In tandem with direct political and social action at the highest level runs a deep-seated, almost sensuous interest in coal mining, a perfect grounding device and counterpoint for a life otherwise spent in lofty realms of high ideals, principles and fine legal wrangling. This is made manifest in decades of loyal devotion to the miners and their cause from his first taste of the pits as a “Bevin Boy” in the forties to his negotiations with Colonel Gadaffi on behalf of Scargill’s striking miners in 1984.
Effectively barred from direct political action in Britain, he served internationally wherever his advocacy could be put to humanitarian use, often as the Voice of Amnesty International, always as a voice for the defenceless. Few people with John Platts-Mills’ direct knowledge of the global damage done by CIA and right-wing machinations live, or dare, to tell their tales.
John Platts-Mills’ early political career brought him into close contact with Winston Churchill, first socially, and later as special advisor on Anglo-Soviet relations during World War Two. He was unceremoniously dumped, along with the Soviet Union, as the American and British governments cemented their alliance after the war. Peripheral links to Churchill, however, continued to reverberate throughout his life, eventually bringing about his first contact with the infamous Kray Twins. Disturbed by the repressive and militaristic direction that the new Labour government was taking, and concerned about Atlee’s compliant attitude towards American foreign policy, he joined forces with Bertrand Russell and the instigators of the World Peace Movement soon to evolve the troublesome “Ban the Bomb” campaign. Tangling with his nemesis Ernie Bevin, the “socialist” Foreign Secretary who resurrected seven monarchies, would taint his life and culminate in a McCarthy-esque witch hunt that led to his expulsion from the Labour Party and the end of his parliamentary career.
His work as a barrister spans sixty years and includes some of the most notorious, fascinating criminal cases of the century. John Platts-Mills was advocate in the murder trials of the Krays, George Richardson and “Cop Killer” Sewell, as well as high-profile business and corruption cases such as Lonhro, the Dawson scrap-metal scandal, and the bizarre “Birched Boy” incident, among many others. His friends, colleagues and adversaries in the legal arena include such luminaries as John Mortimer, Lord Denning and eccentric reactionary, Judge Melford Stevenson.

You have subscribed to alerts for John Platts-Mills.

You have been added to John Platts-Mills's favorite list.

You can also sign-up to receive email notifications whenever John Platts-Mills releases a new book.