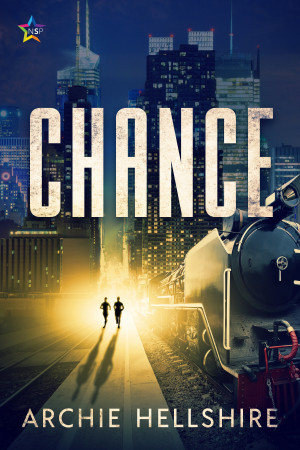 By Archie Hellshire
There comes a time in your life when you just have to take a chance. More
Daniel has spent his life traveling down the same well-worn path, safe inside a prison of his own making, with tomorrow promising no difference from yesterday. Then, one unremarkable morning, he meets someone who throws his life completely off the rails. All he knows about Nathan when he first sees him is that he’s beautiful, but it’s enough to get him to board the wrong train instead of going to the office.

This one careless step off the beaten path has unexpected consequences, as the mysterious passenger is being pursued by a cadre of mercenaries after the parcel he’s tasked with delivering safely to the other side of the city. Daniel has never considered himself brave, or strong, or fast, and he doesn’t come prepared for this fight, but at the right place, at the right time, someone can do the right thing and be a hero for a victim in distress.

Together, staying just out of reach of their pursuers and narrowly escaping tight spaces, they make their way to the delivery point. And as the journey wears on, they learn more about what’s in the parcel they’re carrying, and what it means for the world if they can’t deliver it.
Available ebook formats: epub mobi pdf lrf pdb txt html
First 20% Sample: mobi (Kindle) lrf pdb Online Reader
Price: $3.99 USD
Buy Add to Library Give as a Gift
How gifting works
Create Widget
Tags: romance thriller gay lgbt contemporary humorous
About Archie Hellshire

Archie Hellshire is an author with aspirations of being able to write. He was born in the Caribbean where he developed a love of nature, the metric system, and high temperatures. In school, lacking any athletic or social ability, he became a very bookish person, indulging in the works of Douglas Adams, Terry Pratchett, JK Rowling, and Charles Dodgson. Despite being well read, he struggled with dyslexia and would forever remain horrible at spelling. The advent of Spell Checker reignited his dreams of becoming an author.

Archie grew up in a family and culture that was not tolerant of homosexuals, and he spent his entire young life in the closet, retreating into his books and a rich fantasy life. In the theater of his mind, the romances he read could be edited to be male couples. He dreamed of one day writing his own stories and living his own happy ending.

Reviews of Chance by Archie Hellshire

You have subscribed to alerts for Archie Hellshire.

You have been added to Archie Hellshire's favorite list.

You can also sign-up to receive email notifications whenever Archie Hellshire releases a new book.