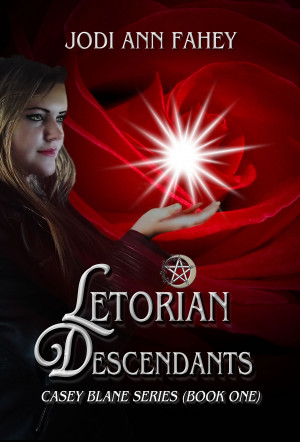 Casey Blane Series:
Over four hundred years ago, King Davalian, The Letorian King, protected the covens from the Pandions and townspeople during the medieval times of the black plague and the witch hunts. Two very gifted sorcerers were part of his army and fought alongside him. One was a woman named Lily who not only helped him to victory but won his heart. Lily was not at all interested in King Davalian. Her love was Connell, the other gifted sorcerer.

During King Davalian’s reign, Lily discovered the secret to eternal life through a series of talismans, a reborn vampire, which she tried on herself. Connell was to be next, and they were to live out their lives, each generation, with each other. Except, that night, things went horribly wrong and even though both had been blessed with eternal life their bond was never completed. Instead, in a jealous rage, King Davalian cursed Connell and forced him to an entity of being controlled by the moon and to never forget.

Connell was forced into a wolf, and after King Davalian’s death, Lily became their queen. That was when a devastating prophecy of her great-granddaughter was told. Her great-granddaughter would be slaughtered by the King to the Pandions, the talismans were to be found, and it would be the demise of the Letorian Coven. The Pandions were destined to be the new ruling coven and destroy everything on its way to get there.

Jodi Ann Fahey studied journalism from the time she was in high school. When she attended Fashion Institute of Technology, she was able to branch out into the world of advertising, as well. It was in that field that Jodi learned Graphic Design as well as film production and photography, both as a model and a photographer. Jodi’s articles on local businesses and events were published in local papers.
Jodi is also a freelance web designer and ad developer. Her work has been published in European Homes and Gardens as well as BiBi Magazine. Also, she has done freelance work on Poetry Bay Online Poetry Magazine and Long Island Quarterly.
Utilizing all of her learned skills, Jodi has started her newest venture, The Casey Blane Series. Jodi not only writes her stories, but she also designs her own covers, creates her own trailers, and designs all her ads. She also created her own website, as well.
Her first book, “Letorian Descendants”, was released December of 2016. In the fall of 2017, “Letorian Descendants was given the distinct honor and recognition by being named and awarded a finalist for the Book Excellence Award. In December of 2017, “Letorian Descendants” was also awarded “One of the Most Memorable Reads of 2017” by Stratford Living.
Jodi’s second book, “Lucian Sword”, was released November of 2017 and was immediately made “Book of the Month” by Rave Review Book Club for the month of January.
Her third book, “Dragon Lines”, is set to release December of 2018 and Jodi is also part of two anthologies scheduled to release in 2019, so stay tuned!

You have subscribed to alerts for Jodi Ann Fahey.

You have been added to Jodi Ann Fahey's favorite list.

You can also sign-up to receive email notifications whenever Jodi Ann Fahey releases a new book.