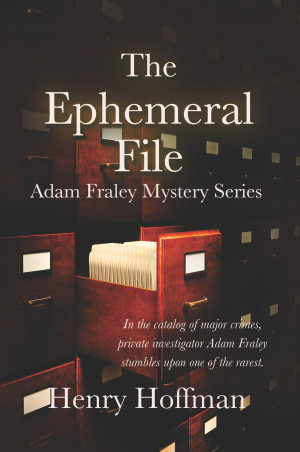 By Henry Hoffman
In the catalog of major crimes, private investigator Adam Fraley stumbles upon one of the rarest. More
What begins as a simple lost love case for private investigator Adam Fraley quickly escalates into something of far greater magnitude during the course of his investigation. Not only is it a potential felony he stumbles across but one of the rarest in the catalog of crimes, all due to a critical piece of information having been withheld by his client, a terminally ill World War II vet. The job eventually takes Fraley to remote stretches of Florida’s Withlacoochee River and events that occurred over a half century ago. At the center of the case are teenage twin sisters, Staci and Kati Carew, whose conflicting friendships, loves, and ambitions rise far above normal sibling rivalry, ultimately leading to a grievous injustice and major cover-up.

Henry Hoffman is a former public library director and newspaper editor whose fiction and non-fiction works have appeared in a variety of literary and trade publication.

He is the author of three previous novels, Bound, Drums Along the Jacks Fork, and Flaherty’s Run. Along with his works of fiction, he has contributed articles to a number of standard reference works, including America: History and Life (ABC-CLIO), the Encyclopedia of Flight (Salem Press), Historical Abstracts of the United States (ABC-CLIO), and the Encyclopedia of Natural Disasters (Salem Press).

You have subscribed to alerts for Henry Hoffman.

You have been added to Henry Hoffman's favorite list.

You can also sign-up to receive email notifications whenever Henry Hoffman releases a new book.