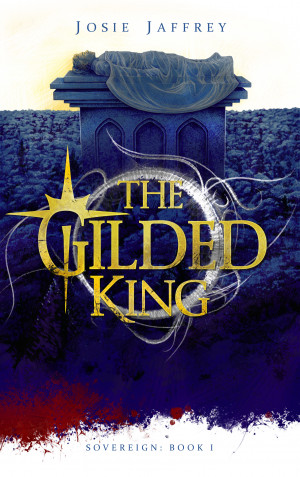 By Josie Jaffrey
The first book in the Sovereign series, a young adult fantasy trilogy set in future Europe. Humanity has been decimated by a blood-borne virus so that only one, small city remains. That city, the Blue, is controlled by a vampiric race called the Silver. The two protagonists of the series will have to uncover its secrets in order to survive the contaminated world beyond its walls. More
In the Blue, the world’s last city, all is not well.
Julia is stuck within its walls. She serves the nobility from a distance until she meets Lucas, a boy who believes in fairytales that Julia’s world can’t accommodate. The Blue is her prison, not her castle, and she’d escape into the trees if she didn’t know that contamination and death awaited humanity outside.
But not everyone in the Blue is human, and not everyone can be contained.
Beyond the city’s boundaries, in the wild forests of the Red, Cameron has precious little humanity left to lose. As he searches for a lost queen, he finds an enemy rising that he thought long dead. An enemy that the humans have forgotten how to fight.
One way or another, the walls of the Blue are going to come down. The only question is what side you’ll be on when they do.
Download: epub mobi (Kindle) pdf more Online Reader
lrf pdb txt
Price: Free! USD
Add to Library
Create Widget
Tags: vampires vampire fantasy zombies young adult zombie dystopian zombie apocalypse young adult fantasy vampire book
About Josie Jaffrey

I have always written stories, but it wasn't until I started the first book in the Solis Invicti series in 2014 that I really became obsessed with writing. I love to read, particularly where the escapism of the story is enhanced with an element of fantasy or science fiction. For me, writing is simply an extension of that journey, but I get to decide what happens next (though it's amazing how often the characters seem to decide for themselves what I'm going to write!).

As a new author, I love to hear from readers with their comments and feedback on the books, so please do get in touch through the website or via Twitter.

Thank you for reading!

Trailer | The Gilded King (Sovereign Book I)
A Book Trailer for The Gilded King, Book I in Josie Jaffrey's Sovereign trilogy, a young adult dystopian fantasy series. Out on 25 June 2018.

The Gilded King (Sovereign Book I) - Book Reading
Josie Jaffrey reads from her book The Gilded King, Book I in the Sovereign trilogy, a young adult dystopian fantasy series set in future Europe.

About the Series: Sovereign

The Sovereign series is set in future Europe, in a world in which the human population has been decimated by a blood-borne virus so that only one, small city remains. That city, the Blue, is controlled by a vampiric race called the Silver.

Beyond its boundaries, the world is contaminated by a vaccine that was developed in order to combat the virus.

The protagonists of the series are Julia, a human teenager, and Cameron, a Silver who is millennia old. The series follows them as they address the corruption of the Blue and stand against an ancient enemy who wants to take control of it for himself. Their endeavours bring them face to face with the zombies that the vaccine should have eradicated, and force Julia to reassess everything she thought she knew about the world.

The series is targeted at young adults. The books contain horror, profanity, M/F and M/M romance, and some limited sexual content.

The Sovereign series is a standalone sequel trilogy to the Solis Invicti series.

You have subscribed to alerts for Josie Jaffrey.

You have been added to Josie Jaffrey's favorite list.

You can also sign-up to receive email notifications whenever Josie Jaffrey releases a new book.