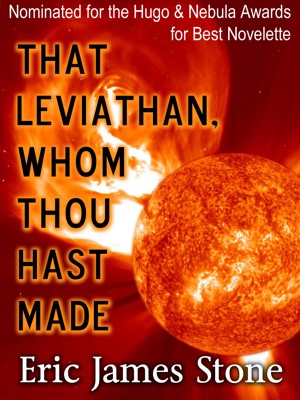 That Leviathan, Whom Thou Hast Made

By Eric James Stone
Rated 4.00/5 based on 3 reviews
"That Leviathan, Whom Thou Hast Made" won the 2010 Nebula Award for Best Novelette and was nominated for the Hugo Award in the same category.

Harry Malan is the president of a Mormon branch on Sol Central Station, where humans can interact with "swales" -- giant star-dwelling plasma beings. When a Mormon swale asks for help, Harry ends up confronting Leviathan, the largest of the swales. More
"That Leviathan, Whom Thou Hast Made" won the 2010 Nebula Award for Best Novelette, awarded by the Science Fiction & Fantasy Writers of America, and and is nominated for the Hugo Award for Best Novelette, awarded at the World Science Fiction Convention.

Harry Malan is the president of a Mormon congregation on a station located at the center of the Sun, where humans can interact with "swales" -- giant star-dwelling plasma beings. When Harry finds out about a problem with one of the Mormon swales, he decides he must help, even if it means confronting Leviathan, the largest of the swales.
Available ebook formats: epub mobi pdf rtf lrf pdb txt html
First 30% Sample: Online Reader
Price: $2.99 USD
Buy Add to Library Give as a Gift
How gifting works
Create Widget
Tags: mormon fiction science fiction novelette hugo award nominee mormon author nebula award winner nebula award nominee
About Eric James Stone

A Nebula Award winner, Hugo Award nominee, and winner in the Writers of the Future Contest, Eric James Stone has had stories published in Year's Best SF 15, Analog, Nature, and Kevin J. Anderson's Blood Lite anthologies of humorous horror, among other venues.

One of Eric's earliest memories is of seeing an Apollo moon-shot launch on television. That might explain his fascination with space travel. His father's collection of old science fiction ensured that Eric grew up on a full diet of Asimov, Heinlein and Clarke.

While getting his political science degree at Brigham Young University, Eric took creative writing classes. He wrote several short stories, and even submitted one for publication, but after it was rejected he gave up on creative writing for a decade.

During those years Eric graduated from Baylor Law School, worked on a congressional campaign, and took a job in Washington, DC, with one of those special interest groups politicians always complain that other politicians are influenced by. He quit the political scene in 1999 to work as a web developer in Utah.

In 2002 he started writing fiction again, and in 2003 he attended Orson Scott Card's Literary Boot Camp. In 2007 Eric got laid off from his day job just in time to go to the Odyssey Writing Workshop. He has since found a new web development job.

In 2009 Eric became an assistant editor for Intergalactic Medicine Show.

Reviews of That Leviathan, Whom Thou Hast Made by Eric James Stone

Very compelling. Makes one wonder about religion and our place in the universe. Good read!

You have subscribed to alerts for Eric James Stone.

You have been added to Eric James Stone's favorite list.

You can also sign-up to receive email notifications whenever Eric James Stone releases a new book.