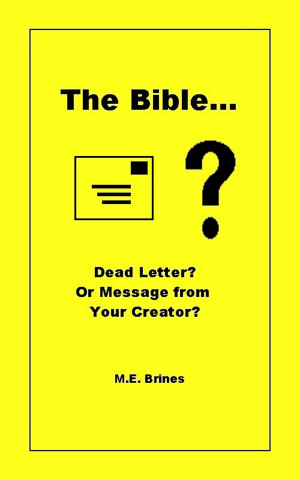 The Bible - Dead Letter or Message from Your Creator?

By M.E. Brines
Rated 4.50/5 based on 2 reviews
The Bible – Dead Letter or a Message from Your Creator – Is the Bible really a message from God? Is there a scientific method of verification? If there were, wouldn’t YOU want to know? Extensive references.
Available ebook formats: epub mobi pdf rtf lrf pdb txt html
First 22% Sample: epub mobi (Kindle) lrf more Online Reader
pdb
Price: $0.99 USD
Buy Add to Library Give as a Gift
How gifting works
Create Widget
Tags: christianity bible atheism vs christianity bible defended inerrancy
About M.E. Brines

Reviews of The Bible - Dead Letter or Message from Your Creator? by M.E. Brines

I liked this short book, though I would have liked to see more of the sources mentioned in footnotes and therefore listed out for the reader's personal research if so desired. It's still a nice and well written read.

Enjoyed it! Quick read. Not so heavy that it would lose the attention regardless of your point of view. The only issue would be a list of references detailing where information was derived from i.e. "...crucified, long before crucifixion was invented...”, "...2,000 years later that archeological discoveries revealed the timing of that decree" were lacking except in one instance. Impressive, but without sources as backup it leaves it to question whether these statements can be substantiated. This however, has not precluded me to suggesting it to others, which I have via Face Book. Not needing to be convinced of the existence of God it did grab me because it does present the subject in a refreshing manner, with an interesting twist. YBIC