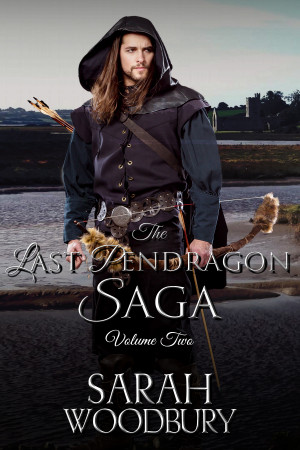 By Sarah Woodbury
Rated 5.00/5 based on 1 reviews
What if the myths and legends were once real? What if gods and demons really walked among us--and the heir to the throne of Arthur was one of them?

Volume Two contains the second three installments in The Last Pendragon Saga. More
What if the myths and legends were once real? What if gods and demons really walked among us--and the heir to the throne of Arthur was one of them?

The Pendragon's Quest: Although the dark forces of Arawn are defeated, the Saxons have massed on the border of Wales, aiming for nothing less than the complete subjugation of the Welsh people. But defeating an army of Saxons is only the first step Rhiann, Cade, and their companions must take if they are to stop Mabon from claiming dominion over the human world for all eternity.

The Pendragon's Champions: The fickle god Mabon, loose again in the human world, searches for the Thirteen Treasures of Britain. With each one he collects, his power grows. Knowing that time grows short, Cade sends out his champions to draw lords from throughout the land together for a final stand against Mabon--before it is too late.

Rise of the Pendragon: With the other gods forbidden to interfere in the human world, it is up to Cade, Rhiann, and their companions to stop Mabon and the Saxons--and time is running out.

With over a million books sold to date, Sarah Woodbury is the author of more than forty novels, all set in medieval Wales. Although an anthropologist by training, and then a full-time homeschooling mom for twenty years, she began writing fiction when the stories in her head overflowed and demanded that she let them out. While her ancestry is Welsh, she only visited Wales for the first time at university.  She has been in love with the country, language, and people ever since. She even convinced her husband to give all four of their children Welsh names.

Sarah's books include:
The After Cilmeri Series:
Daughter of Time
Footsteps in Time
Winds of Time
Prince of Time
Crossroads in Time
Children of Time
Exiles in Time
Castaways in Time
Ashes of Time
Warden of Time
Guardians of Time
Masters of Time
Outpost in Time
Shades of Time
Champions of Time
Refuge in Time
This Small Corner of Time

The Gareth and Gwen Medieval Mysteries:
The Bard’s Daughter
The Good Knight
The Uninvited Guest
The Fourth Horseman
The Fallen Princess
The Unlikely Spy
The Lost Brother
The Renegade Merchant
The Unexpected Ally
The Worthy Soldier
The Favored Son
The Viking Prince
The Irish Bride

The Lion of Wales Series:
Cold My Heart
The Oaken Door
Of Men and Dragons
A Long Cloud
Frost Against the Hilt

The Paradisi Chronicles:
Erase Me Not

About the Series: The Last Pendragon Saga Boxed Set 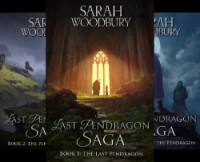 He is a king, a warrior, the last hope of his people--and the chosen one of the sidhe ... journey with Cade and Rhiann to a world of myth and magic in Dark Age Wales!

The Pendragon's Quest is the second book in the "The Last Pendragon Saga" by Sarah Woodbury. This story picks up right where the first book "The Last Pendragon" leaves off. We find Cade, Rhiann, Taliesin and their companions facing a threat far greater then the forces of Arawn ; the Saxons and Mabon who seeks to destroy them all.

Sarah Woodbury outdoes herself with "The Pendragon's Quest", which I thought was impossible because the first book was so good. I was wrong, this book surpasses the first as the author brings us deeper into Cade's world and those of his companions. Again I was caught up in the brotherhood of warriors whose mettle was tested time and time again in battle. The story explores and adds more depth to the Characters of Cade's most trusted Knights; Dafydd, Hywel and Gornowry whose loyalty to King and country could cost them their lives. We see the true meaning of courage and the will to never surrender flow from the pages of this novel. We see the love grow and strengthen between Cade and Rhiann along with the respect they have for each other and their vulnerably in their need for each other. And last but not least Taliesin who in this story has his own demons to fight, as Cade journeys with him to a place where only few have gone before in search of something that was lost. The author also introduces two new female characters which add depth to certain characters. These subplots within the story all weave together beautifully at the end.

The author's love for Wales and the Welsh people can be felt with every word that is written. I found myself wanting to take up arms and fight under the Red Dragon banner. Staying true to the Welsh historical facts the author blends them seamlessly with the Welsh myths, legends and her characters within the story. One can truly feel the pride and determination of the Welsh people fighting against submission to the invaders from the North and their desire to be united under one King.

Having a love affair with Wales myself, I was so excited to see so many familiar places that I have visited in the book, the familiar feeling of the landscape transported me deeper into the story as I envisioned the battles that were taking place. It made the story that much more real to me. Wales is truly a land of mist, myth and legend and Sarah Woodbury captures it all within her tale.

The novel is extremely well written, and Sarah Woodbury is a true Bard in every sense of the world. Her storytelling ability and true to life battle scenes puts her right up there as one of my favorite authors. The cover artwork for her book is amazing and just helps fuel the imagination as the story unfolds as myth and legend come to life. I give this book 5 stars.

You have subscribed to alerts for Sarah Woodbury.

You have been added to Sarah Woodbury's favorite list.

You can also sign-up to receive email notifications whenever Sarah Woodbury releases a new book.