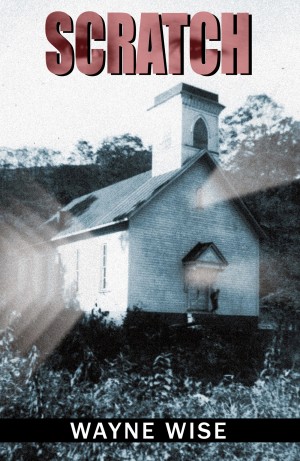 A little girl named Gabrielle, believed to be an angel, has been kept chained in the church basement for over a century now, prisoner of an ancient pact. Unaging and unearthly beautiful, Gabrielle has the power to heal.

A madman pursues outsiders Adam and Holly Mansfield to Canaan, intent on kidnapping their daughter. Once there they discover there is one other secret in Canaan.

Chained deep in the heart of the mountain is another being, a demon called Scratch. If Gabrielle is freed, Scratch will be as well, and his vengeance and evil will consume the town.
Available ebook formats: epub mobi pdf rtf lrf pdb txt html
First 20% Sample: epub mobi (Kindle) lrf more Online Reader
pdb
Price: $2.99 USD
Buy Add to Library Give as a Gift
How gifting works
Create Widget
Tags: shamanism angels and demons psychopathic killer
About Wayne Wise

Wayne Wise is a writer, artist, storyteller, seeker shaman and magician, or at least claims to be in casual conversation. He has a BA in History and an MA in Clinical Psychology and in his life has worked as a counsellor, an administrative assistant for a state legislator, an inter-office mail courier, a freelance comic book inker, and a department store Santa. He wrote music and comics-based articles for several local news mags and a couple of now-defunct national magazines. In 1993 he and his business partner/collaborator Fred Wheaton won the Xeric Grant and self-published the comic book Grey Legacy. In 2010 he wrote and drew a follow-up called Grey Legacy Tales. Raised in rural southwestern Pennsylvania he is currently employed by the Eisner Award-nominated comic book store Phantom of the Attic in Pittsburgh and recently taught a course in Comics and Pop Culture as a guest lecturer at Chatham University.

Reviews of Scratch by Wayne Wise

You have subscribed to alerts for Wayne Wise.

You have been added to Wayne Wise's favorite list.

You can also sign-up to receive email notifications whenever Wayne Wise releases a new book.