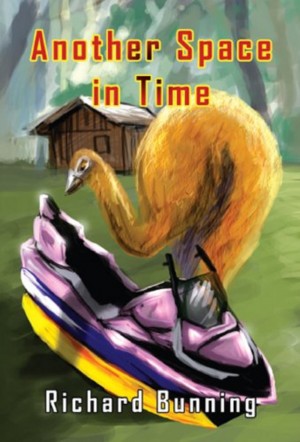 Another Space in Time

By Richard Bunning
Rated 4.00/5 based on 2 reviews
The adventure in another time in space of Rodwell Richards who, when murdered on Earth, finds himself pursued on Goranas as a terrorist killer. This earth-like parallel world, to which Rodwell must quickly adapt, is just perhaps the kind of place that any of us could one day visit. Enter this speculative world of human drama, and observe the pursuit through Rodwell's eyes. More
The story of Rodwell Richards' death and "rebirth" into a parallel dimension, opened my mind to questions about humanity's place in the multiverse of space. This story's author, Richard Bunning, has faithfully recorded for me many of the vivid memories I "inherited", along with Rodwell's donated heart. My eyes have long failed me, but Rodwell's story never dims. As my time here draws to a close, I feel that I owe it to this world to leave a record of Rodwell's adventure for all to read. One won't get a glimpse of Heaven, nor thankfully Hell, though one might gain some hope of a long road yet to be travelled when faithful hearts stop beating. Of course humans are just humans, even with the gift of "rebirth": imperfect souls one and all. We see into a world as corrupted and divided as our own, as we share Rodwell's struggle to overcome terrorists, and police who have him labelled with murder. The struggles of a migrant across space and time, have a resonance with the fears of any new citizen immersed in an unfamiliar culture.
Enjoy this story as a fairy-tale, speculative fiction, or whatever you choose. As is yours, my mind is my only truth.
Arther Fieldman, Carlton Heath, Nethertown, Lincolnshire.

I am currently a writer of speculative Science Fiction.
Thank you to all who read my books.
I review other peoples works in many genres, specialising in helping promote self published and small publishers authors. My main reviews site is at http://richardbunningbooksandreviews.weebly.com

I am not much on metaphysics so my review can be taken with a grain of salt. The story is about a man who is assassinated and awakens to find himself in parallel universe afterlife. For the first third of this book, a lot of time is spent on the cosmology that makes this possible and, to be frank, it almost lost me. But once the action finally gets underway the story becomes a tale of intrigue and pursuit as the central character becomes involved with the machinations of terrorists and soon finds himself a hunted man. There are no rules in fantasy, except that the author remain true to his own set of rules, and Bunning succeeds in doing this consistently throughout his tale. There are some good characters here and a plot to keep the reader's interest, although at times, the dialogue plays more like soliloquy than conversation. Nevertheless, there is a good original story here from an author with the skill to pull it all off and it is worth a read.

Another Space in Time tells the story of Rodwell, a man unfortunate to be killed in his sleep, but fortunate enough to wake up on an entirely new planet as an Arrival. All seems well for Rodwell at the beginning as he tries to adapt, and certainly his new "home" seems a lot more pleasant than Earth... until he gets charged with some horrible crimes he knows nothing of.

The setting of the book is definitely interesting; Goranas (the planet) is a fascinating flat realm, and the author went into lengths to make it similar and yet not-so-similar to Earth. You'll feel as confused as Rodwell as he tries to get accustomed to the fact that there are 8-day weeks and years are referred to as cycles. You will notice the subtle differences throughout the story.

The plot itself was quite well-woven. The mystery thrown into this sci-fi novel keeps you guessing throughout and wondering what was going to happen next. I admit that I had no idea who the culprit was until the author revealed them, and by then I was pretty surprised (and quite relieved at the same time).

I liked the cast of characters, Rodwell being my favourite. His sarcasm and wit felt so refreshing in the book; I like people who use humour to cope with situations that are too much for them. You couldn't help but root for him and hope that he'll succeed in unraveling the mystery and saving his skin!

The only qualm I had with the novel was that the author tends to get wordy at times. I didn't mind the formal style because the "era" of Goranas rather required it, but sometimes some passages dragged on and there was a lot of info-dumping. Otherwise, Richard Bunning's writing was great and I was impressed by the excellent proofreading done on this novel. It was pretty good for a debut indie novel!

You have subscribed to alerts for Richard Bunning.

You have been added to Richard Bunning's favorite list.

You can also sign-up to receive email notifications whenever Richard Bunning releases a new book.