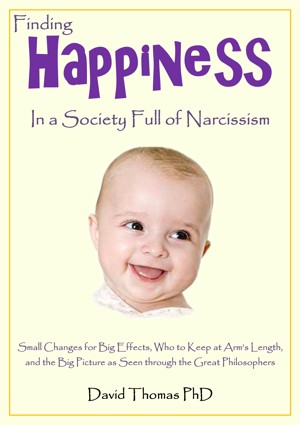 Finding Happiness in a Society Full of Narcissism

David Thomas works as a company director and consultant. Formerly, as CEO, he built a business up from three to nearly one hundred employees. He is a Fellow of the Chartered Management Institute and hold masters and doctoral degrees in management from Sheffield Hallam University and the University of Derby.

His research interests are in managerial psychology, narcissistic behaviour, and the philosophy of happiness. He has researched over many years the behaviour of CEOs and senior managers, as well as other office staff and shop floor workers from a variety of walks of life. His doctoral thesis is entitled 'Analysis of Senior Management Teams that have Demonstrated a Proclivity for Growth'; it is held at the British Library.

David is the author of the book Narcissism: Behind the Mask; it was written following his in-depth research into CEOs and company directors, which revealed high levels of narcissistic behaviour in the boardroom, and in the home. It was published in hardback format, then a second printing, both of which sold out. The book was then issued in paperback format, re=printed again, and it again sold out. It is now only available in eBook formats.

You have subscribed to alerts for David Thomas.

You have been added to David Thomas's favorite list.

You can also sign-up to receive email notifications whenever David Thomas releases a new book.