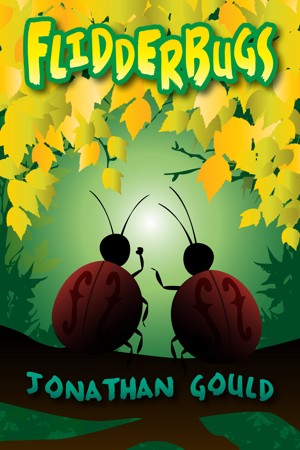 By Jonathan Gould
Rated 4.77/5 based on 13 reviews
Flidderbugs is a political satire, a modern fable, or maybe just a funny little story about a bunch of insects with some very peculiar obsessions. More
As Kriffle the Flidderbug investigates why his fellow 'bugs find it impossible to agree on the pressing issue of how many points there are on the leaves of the tree on which they live, he finds that the truth is more complicated, and ultimately more terrifying, than he ever could have imagined.

Jonathan Gould is a Melbourne-based writer and doodler.

He calls his stories "dag-lit" because they're the sort of stories that don't easily fit into the standard genres. Some might think of them as comic fantasies, or modern fairytales for the young and the young-at-heart.

Over the years, his writing has been compared to Douglas Adams, Monty Python, A.A. Milne, Lewis Carroll, the Goons, Dr Seuss and even Enid Blyton (in a good way).

Reviews of Flidderbugs by Jonathan Gould

“Flidderbugs” by Jonathan Gould is an enjoyable novella that on the surface appears to be a fun little children’s story. However, underneath this there is a satirical element that should appeal to most adults as it pokes holes in both the democratic process and the rather arrogant ivory tower of academia. Without doubt, this really is a book that can be read to your children and enjoyed by them and yourself.

The story itself follows Kriffle, an insect who is heir to his father as potential leader of the Triplifer tribe. As leader of his tribe, his main job would be to debate with the leader of the Quadrigon tribe about if the leaves on the tree they inhabit have either three or four points. This is the fundamental question that governs their lives and decides who is in power via elections. Kriffle finds it hard to understand how the Quadrigons could disbelieve the evidence that is before their very eyes and therefore undertakes an adventure to investigate and prove that there really are only three points on a leaf.

The plot itself is simple, but the way in which Gould uses it to explore and satirise various elements of our society was highly entertaining and at times quite clever. I thoroughly enjoyed seeing the political process in the novel at work as it really highlighted some of the rather “sad” aspects of our own democratic party based systems. In addition, here were various university professors that Kriffle meets on his journey who have spent years debating the philosophy of leaves etc. during their academic lives but couldn’t actually tell him any real facts.

The writing itself is concise, entertaining and incredibly well paced which was needed due to the story being contained within a novella rather than a full length novel. I was impressed to see that Gould managed to include a fair number of encounters and adventures as Kriffle explores his society without having to cut out any of the required detail. Don’t get me wrong, there are some elements of the society the reader learns very little amount but there is enough there to ensure it all makes sense and is believable on some level.

In regards to the characters, it was nice to see that the Flidderbugs all had such distinct and fleshed out personalities. I could understand very quickly what the various individuals were all about which was vitally important when the story is being told in the form of a novella.

Overall, I found this to a quick and fun political satire that provided me with a hopeful ending rather than the usual depressing finales seen in many other novels that touch on the same satirical subject matter. If you enjoy satire then I suspect you will like this novella, I know that I was happy to find myself laughing at myself when I realised that I had fallen into some of the same traps as the Flidderbugs.

Jonathan is one of the most creative writers I have come across. This is my third (after Doodling and Magnus Opum) encounter with this talented author and he never ceases to amaze me.

Flidderbugs is about two groups of ‘bugs, the Triplifers and the Quadrigons, who live – divided – in the Krephiloff Tree. If you thought that politics and devious ‘business’ practices were exclusive to humans, be assured that they find their way into the Flidderbugs’ world too. A very important and divisive issue separates the two groups – does a leaf have three or four points? It takes the offspring (Kriffle and Fargeeta) of the elders, who have long held council, to bring a refreshing new outlook to proceedings and to make them see the error of the traditionally held beliefs; but they have to act quickly – three points or four on a leaf will make no difference when there is a much more serious and urgent dilemma needing immediate attention.

I loved the characterisation of dotty professors, dogmatic seniors, smarmy dodgy ‘business’ characters and homely, doting (Klummerfly soup-making) mothers. I loved the way the ‘tree’ is the Flidderbugs’ ‘world’ which brings a new dimension to the phrase ‘What in the Tree was I thinking of’. I loved the portrayal of the wheeler-dealer Flidderbug and his shiny, pristine carapace and sleek, trim antennae, and I especially loved the shambolic professor’s very logical explanation to the impending disaster, “The vectors of pressure bearing down on the indices of the central support elements in regard to the key structural components have reached a point where the proportion of lateral forces henceways in opposition to the lateral forces forthways have exceeded the most preferred ratio, leading to a situation in which vertiginous damage will shortly be unavoidable, resulting in a catastrophic breakdown in said structural components and raising the potential of a near complete collapse of the entire encompassing environment.” It’s obvious, really, isn’t it?

This is only (sadly) a short, really easy-to-read story, but it’s huge on entertainment, charm, likeability, and genius.

A captivating short book, with a witty satirical edge that was a delight to read. It’s a charming tale and a quick page-turner that leaves the reader both smiling and pondering the underlying themes. The author has a fabulous knack of combining acerbic lampooning with an entertaining yarn.

I live in a back to back terraced house. I know that my roof is... well, I'm not actually sure what colour it is and it's raining so I'm not going out to check. But say it was blue. That should mean that my neighbour's roof is also blue, right? But what if they KNOW they their roof is pink?

When I opened Flidderbugs and read the first couple of lines, Orwell's 1984 immediately came to mind, more specifically Minitrue (aka The Ministry of Truth). In truth, my associations weren't too farfetched: there are aspects of Flidderbugs that mimic the absurdity of Minitrue and its slogans WAR IS PEACE, FREEDOM IS SLAVERY and IGNORANCE IS STRENGTH.

Flidderbugs is an interesting tale of what we know versus what we believe. Do we believe something because we know it to be the case? Or do we know something because it fits in with our beliefs? Can politics, like religion, prevent us from approaching situations logically? And is it always in our best interest to listen to the information that is fed to us from those who - allegedly - know better?

Doodling, Gould's first title (and a Goodreads Choice Awards: Best Humor semi finalist), was a fabulously fun read with a heavy smattering of satire. Flidderbugs takes satire to a whole new level. Yet its real genius lies not in that but in the fact that you don't actually realise the strength of the messages until you've completed the book. Flidderbugs simply seems like a good read (saving initial Orwellian thoughts) but it's the period after you've closed the final page or put down your ereader that the heavy thinking kicks in.

What an amazing achievement: fiction that provides you with an incredible and fun read but leaves you full of thoughts long after you've finished the final paragraph. More please, Mr Gould. Much, much more!

(reviewed 15 days after purchase)
Angelito G. Nambatac Jr reviewed on Nov. 15, 2011
(no rating)
Though it didn't level even closer to Doodling, I still find FLidderbugs a good one.

Flidderbugs by Jonathan Gould
Reviewed by Alex Canton-Dutari
The Krephiloff Tree -- Tree of Life, New York City, London or even Panama. Half the world doesn't know how the counterpart lives, and not always by lack of travel but by direct, manipulated distortion of reality.
I found this to be a book about politics, distorted science and sociology, better transmitted to us human readers by animal characters, with which we tend to identify since childhood.
This is, definitely, my kind of book: apparently light, but profound.

Flidderbugs is a quirky short tale about two opposing tribes of bugs that live in the Krephiloff Tree. The major argument between themselves is whether the leaves have three or four points to them.
Little do they know that just around the corner is real danger to their very existence and the two opposing tribes will have to overcome their differences if they are to survive.
Although this is a short story it comes with a big message.
In any argument just because you think you are right does not mean that you are right and that the real correct answer might be beyond what you see.
Jonathon concentrates on the storyline and never actually describes what the Flidderbugs look like but despite this holds your attention from the first page to the last.
This is a story that should suit all ages as the characters are very likeable with a plot very easy to follow.

An amiable tale for kids and adults alike. For adults, there's a satirical bent and for kids, the pleasure of a shared story. At 99c, this is one serious bargain.

I'm not a fan of talking animals (and even less insects), but this satire was wonderful. I read it in two sitting and recommend it to both adults and children - the latter will enjoy the story, but their parents will be able to read the subtext. Must check more about this author!

A charming little tale that tickled the child in me.

You have subscribed to alerts for Jonathan Gould.

You have been added to Jonathan Gould's favorite list.

You can also sign-up to receive email notifications whenever Jonathan Gould releases a new book.